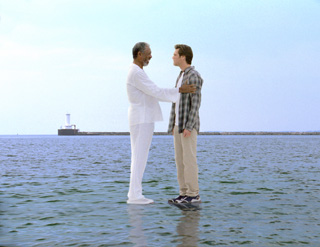 In a nutshell, Bruce Almighty is about a funny guy named Bruce – a reporter covering quirky "special interest" issues – who dreams of becoming a respected anchorman, not realizing that he does the most good, brings the most joy, as the funny guy doing man-on-the-street interviews about the world's largest chocolate chip cookie. OK, in the middle somewhere, he becomes God for a while, but put that aside for the moment, and you see the parallel: Jim Carrey is an actor – a funny actor – who wants to be taken seriously as a dramatic actor, when really what the man-on-the-street wants is to see Jim Carrey talking out of his ass again. Bruce Almighty attempts to blend both sides of the actor – comedic and dramatic – and while Carrey achieved that balance quite wonderfully in The Truman Show, Bruce Almighty doesn't so much straddle the fence as impale itself on it. The fault lies almost squarely with Carrey. He continues to be one of the funniest actors working today; however, his humor – or rather, his shtick – is all wrong here. Bruce Almighty is in fact a terribly earnest piece about doing right by others and getting to know yourself and (gulp) your God more perfectly. Apparently, that pitch didn't go over with the marketing folks at Universal, which is why the trailers instead focus on Carrey's limber-limbed pranks and the miraculous potty training of Bruce's dog – on the toilet, with the sports section (a sight gag that, God help me, splits my side every time). Fido's evolved potty routine comes care of Bruce's newfound powers, bestowed unto him by God. God is played by Morgan Freeman, and I cannot imagine a more perfect casting choice - yet they still manage to dress him up in a janitor's jumpsuit (Cecil B. De Mille never ordered Charlton Heston to push a broom around, but then, his Moses was a white man, and Hollywood has always had different expectations for its actors of color). God needs a vacation, so he hands the reins over to Bruce, who frankly doesn't deserve them. He spends a great deal of time and energy abusing said powers: parting his tomato soup into a miniature Red Sea, walking on water (in front of an atrocious blue screen), and pulling the moon closer to his balcony in order to woo his girlfriend Grace (Aniston, who is far too good for these long-suffering girlfriend parts). That last trick – er, "miracle" – causes a tidal wave over in Japan, which is meant to be funny – and kinda is, according to the logic of the film. However, halfway through, the rules are changed: Suddenly, the filmmakers insist we care about the damage Bruce has wrought, if only so that he may achieve his third-act redemption. The film demands laughter and tears – a not-unheard-of combination – but bungles that ambition thoroughly by cleaving the film in two: The first half plays like any other Jim Carrey slapstick comedy; the second slides into a Capra-esque heartwarming stance. Neither half is wholly successful, mostly due to Carrey's unwavering smarm. He wears a smirk throughout, playing not a flesh-and-blood character but a vessel for Jim Carrey's Crazy Antics, and I can't help but wonder if the film might have worked with a more sincere, if less comically inspired, actor at the helm.