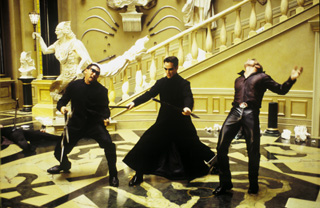 Four years ago The Matrix revolutionized – in a very real sense – the politics of science-fiction filmmaking. Here was a story that was at once smart, dense, playfully intellectual, occasionally humorous, and oozing enough style to take down the House of Versace should it have felt so inclined. Whole books ended up being penned about the Matrixmythos, and while the original’s pseudo-science seemed an awful lot like a philosophy freshman’s weed-induced bull session when held up to close inspection, the very fact that people even bothered to examine it in the first place was proof enough that those mysterious Wachowski Brothers (Andy and Larry, who give no interviews and seem to scuttle back under the metaphorical ’fridge every time I turn on the lights) had created a film with enough mental oomph behind it that they wouldn’t have to blush whenever someone mentioned their film in the same breath with 2001: A Space Odyssey. And, of course, there were the effects, those amazing "bullet-time" sequences (first spotted in a Gap khakis advertisement a year before) that had hero Neo (Reeves) slow-motion back-pedaling to avoid suddenly somnolent tracer rounds. "Whoa," was all anyone could say. Reloaded arrives in theatres with roughly the same sense of elated expectation usually reserved for the Second Coming (which is fitting, considering the film’s parablelike structure and obvious allusions to messianic Christianity). Simply put, it’s the movie to beat this summer, and it’s unlikely anyone else in the running (even you, Wolverine) will be able to swipe a chunk out of it once it opens. The good news, then, is that Reloaded is fairly bursting with whip-cracking action set-pieces, even more than in the original, with that nifty bullet-time trickery upped to the nth degree, and evil Agent Smith (Weaving) – he of the eerily monotone cop-voice and imperturbable demeanor – now able to replicate himself seemingly infinitely. A (very) quick recap for the newcomers: Neo and pals Morpheus (Fishburne) and Trinity (Moss) are out to take down the evil machines who run the "Matrix," a vast computer program that has enslaved the human race by planting a false reality (literally, our reality) in their noggins. Freed from their enslavement, they and their underground army in Zion battle these machines while awaiting the realization of "the prophecy," which foretells the fall of the their enemy and the arrival of the "One," aka Neo. Joseph Campbell (or C.S. Lewis) would have a ball with all the Christian mythology that backstories the world of The Matrix (and George Lucas must be feeling old-hat right about now), but Reloaded suffers mightily from sequelitis. Forced to explain what’s going on and what’s going to be going on in the next and final installment (due out in November), the Wachowskis have laced the film with a series of crushingly dull and often incomprehensible scenes of exposition and yakky gabfests. If Neo’s not getting his black-clad bottom bruised by Agent Smith and his minions, he’s puzzling out the (un-)realities before him. There’s only so much Rubik’s Cubism a film can handle, and Reloaded is awash in sci-fi and religious overtones that continually bog down the film’s forward motion. There’s even a tacky "rave" sequence during which the citizenry of Zion get down and dirty (and wet and funky) as though they’d suddenly been transported to Blade’s disco bloodbath. I’ll take a Jon Stewart on this one and just say "Whaaaa?" Perhaps it’s unfair to compare Reloaded to its genuinely groundbreaking predecessor, but you can almost taste the beads of sweat popping out on the Wachowskis’ brows as they fight to top their original glory. But even in the world of The Matrix, that’s just not possible.