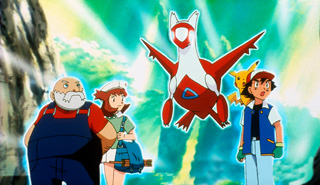 Does any kid worth his or her Gameboy Advance SP even care about the Pokémon series anymore? And if so, why? I’ve gone easy on parent company Nintendo’s goofy series for a while now, but c’mon shortstuff – shouldn’t you be at home watching a Hayao Miyazaki film by now? With its flat animation, garishly overblown color palette, and resoundingly witless storylines, Pokémon has become the albatross around anime’s neck, dragging down everything from Vampire Hunter D to Gunsmith Cats and Cowboy Bebop in the swirling vortex of its sheer befuddled crudeness. Even venerable Dragonball Z gets spattered with Poké-goo every time errant ochre demon Pikachu pedals by on its nongender specific Tricycle of Awfulness. I’ll grant you that the Pokémon series – which started out life as a trading-card game before metastasizing into its current form as an animated kid’s television show so crackhead, flashbang jittery that the December 1997 Japanese broadcast reportedly sent a whopping 685 children to the hospital with "photosensitive seizures" – is about as morally ambiguous as the Easter Bunny, and that the series dollops out sage kidhood advice on such topics as loyalty, respect, and good old-fashioned micromonstermanaging but isn’t all that covered better in Andy Warhol’s L’il Interview? Well, okay, perhaps not, but you see what I’m getting at. Pokémon Heroes strays not an inch from the Nintendo-circumscribed storyline: Young pals Ash (Taylor), Brock (Stuart), and Misty (Lillis) travel to what looks like Venice, Italy (but is actually Altamare), to track down a powerful protective device called, winningly, the Soul Dew. Like Venice, Altamare has trouble keeping the sea at bay, which is where the Soul Dew comes in, and also where the femme-fatale thievery corporation of Annie and Oakley enter into the convoluted plot, desperate to steal the device. Ash and trusty infantile sidekick Pikachu, along with a pair of new Pokémon critters named Latia and Latios – flying, vaguely equine beasties that resemble poorly realized Ultraman foes – have to recover the Soul Dew (admittedly, it’s fun to say!) and save the city. Or something. Frankly, it’s hard to tell what’s going on most of the time, but one creepy bit has the airborne Pokémon turning into sexy, short-skirted schoolgirls straight out of the popular Japanese hentai series La Blue Girl, minus the risqué factor and tentacle sex. That the film flounders in a sea of truly horrific J-pop songsmithery (apparently re-recorded by nasally English vocalists) does not a jot to help things along, and kids will likely doze off from sheer tedium. Parents might opt to use Pokémon Heroes as a form of punishment, I suppose, but there are laws against that sort of thing, or there ought to be, by golly. The film comes with a strong pro-ecology message, which is its only saving grace, although it’s offset by the mountains of bargain-basement animation you have to sit through to get to it. Kids will revolt, parents will snooze, and I will be downright giddy if I never encounter another Pokémon movie as long as I live. Ack!