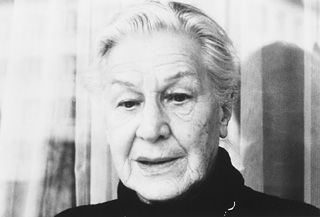 If we are to have any chance of outrunning or outwitting history, we must first stare it in the face. And for 90 minutes, that’s what this German documentary helps us do. The film captures the recollections and reflections of Traudl Junge, Adolf Hitler’s private secretary from 1942 until his suicide in 1945. For close to 60 years, Junge has remained silent despite numerous interview requests, preferring to keep her own counsel and self-criticism. Perhaps because she had cancer and knew she was dying, Junge finally decided to open herself up to André Heller, a well-known Austrian multimedia artist, and his cameraman Othmar Schmiderer. This woman, who was a 22-year-old girl when she entered Hitler’s service, has yet to forgive herself or make peace with her past. To this day, she wonders how she could have been oblivious at the time to everything that history has since proved happened. She believes she saw or heard nothing about Hitler’s genocide at the time, and remarks on how genteel, fastidious, and personable he was in private. The Hitler she experienced seems incompatible with everything she came to learn about him later. Yet how could she have not known? It’s the same question humanity has asked of the German people for all these decades, and Junge is still plagued by the thought. We look at her and expect to see the face of horror, and instead witness an ordinary face dappled with rouge and lipstick and the play of exhaled cigarette smoke. Blind Spot derives its vitality from this interplay of conflicting emotions. We want to watch, but something within us also wants to avoid the confrontation. The German people have also been subject to uncomfortable international scrutiny regarding their willingness to fully accept complicity for the Nazi atrocities, and one wonders how much of Junge’s testimony is part of that impulse. Yet we are also here confronted with the sad sight of an 80-year-old woman near death who can still not forgive her younger self. Blind Spot, which is so astonishing in its subject matter is nevertheless puerile in its technique. The documentary is little more than a talking-head monologue. Filmed over three separate sessions encompassing 10 hours of footage, the film splices together the selected segments of testimony. Throughout, the filmmakers keep the camera tightly fixed on Junge’s face and seated torso. The decision was made to not augment this documentary with outside or background footage. The effect is monotonous to watch and you frequently wish to see Junge’s apartment or a photo of her as a young woman. Nevertheless, the technique is also a testament to the ability of a good tale to tell itself. As the movie approaches its final third and Junge begins to describe the final weeks and days in Hitler’s bunker, and his marriage to Eva Braun, and Hitler dictating to Junge his final will, the story becomes so riveting that any movement at all would come as a shock. Most important, Blind Spot: Hitler’s Secretary makes us wonder, in a very human sense, about the various blinders we all adopt to make our peace with life.