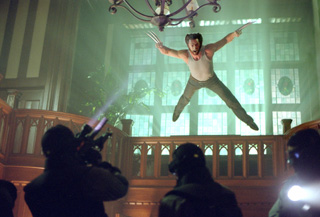 At the rate they’re going, Bryan Singer’s X-Men films – adapted from Marvel Comics’ popular and long-running series about mutant superhumans living, loving, and kicking some righteous bad-guy booty when they’re not schooling or being schooled at Professor Xavier’s School for Gifted Youngsters in Westchester, New York – are likely to be viewed historically as the most audacious use of a none-too-subtle New Queer Cinema subtext in megabudgeted Hollywood films ever, and for that alone they deserve kudos. The X-Men (and Women) exist in X2: X-Men United as an allegory on the marginalizing, dehumanizing effects of arch conservatism toward whatever subculture one might care to name, be it gay, African-American, Jewish, Muslim, or any number of groups that fit the classic "Other" bill. There’s even a scene in which one young X-Man outs his mutant self to his shocked, suburban, steadfastly "normal" parents. Says Mom, "Have you tried being, you know, not a mutant?" Certainly Singer, who is openly gay, has never denied the films’ subtle use of gender and sexual metaphors, and Sir Ian McKellen, as the villainous Magneto (replete with borderline-campy zingers), recently spoke about X2 to the British film Web site Empire Online saying, "It’s basically about being gay, or at least being part of a minority that society disregards. … As an openly gay man, I know what that’s all about." Droll is as droll does, and McKellen’s Magneto plays like a more stodgy Quentin Crisp after raiding Darth Vader’s black leather armoire. Spiffy, indeed. Comics fans already know that Marvel long ago mastered the art of niche-character mining and marketing (teen-angster Peter Parker and alcoholic industrialist Tony Stark – aka Iron Man – to name just two), and thus they were the first to present an openly gay superhero with Northstar … not to mention an updated version of the maverick cowpoke Rawhide Kid, who’s awfully handy with the iron, if you catch our drift. All sexual-identity polemics aside, X2 is a ripping good action yarn that makes Singer’s original seem positively moribund in comparison. It’s the difference between a director with a pretty serviceable idea of where he wants the characters to go and what he wants them to say and a director who has arrived, full of Big Ideas and the wherewithal to enact them. New characters are introduced – most interesting is Alan Cumming’s Kurt Wagner, aka Nightcrawler, a deeply religious Catholic who just happens to resemble a blue-skinned hell spawn (complete with a lashing demon’s tail) and the ability to teleport – and there’s also a burgeoning teen romance between newcomer Iceman (Ashmore) and Anna Paquin’s Rogue, which turns the usual hormonally addled teen dalliance on its clichéd head (Rogue’s touch is lethal, so any more than a quick grope or a fast tongue-dance is out of the question for these two young lovers). To a lesser extent the previous quasi-love triangle between Jackman’s feral Wolverine, Janssen’s telekinetic Dr. Jean Grey, and Marsden’s straight-arrow Cyclops is more fully realized, as is father-figure Professor Xavier’s (Stewart) complex relationship to Magneto. X2 is an altogether more viscerally engaging film, from its relentless pacing and slam-bang effects work to the fine, appropriately heroic score by John Ottman. That the movie has an obvious gay subtext neither adds nor detracts from the film’s smashing popcorn appeal (although you can bet Jesse Helms won’t be hitting the matinees), and the fact that the film’s unnecessarily appended title now makes our heroes sound like a soccer team (Finally! Someone can take that ball-bending Beckham down a notch!) can be overlooked in favor of the fact that the film is just plain smart, rip-roaring summertime cinematic fun. Excelsior!