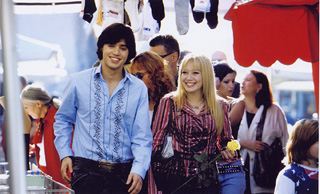 The title says it all, really. The adorably klutzy heroine of Disney’s eponymous TV series jets off to Rome after her momentous junior-high graduation, but the Eternal City plays second fiddle to Duff’s dimpled smile. Lizzie McGuire is a cinematic fast-food meal for tween femme fans, with cute but nonthreatening boys (best bud Lamberg), a bratty brother (Thomas), tons of great outfits and new highlights, the occasional gelato, and a climactic makeover scene. There’s a plot point stuffed in between the poppy montages of shopping sprees and the Tivoli Gardens: Bubbly blond Lizzie is mistaken for a look-alike pop star (Duff again) and sucked into a plot to replace the singer at the International Music Video Awards. (In what may be a high point for the adults in the audience, she also receives a delicious wheel of parmigiano-reggiano from a zaftig Mediterranean peasant woman.) Her Farrah-haired stage partner Paolo (Gellman) woos her from behind the wheel of some really sweet little Eurocars, but is Paolo as cute and nonthreatening as he seems? Will the imperious school chaperone (Alex Borstein, who’s a winning distraction) bust Lizzie? And can she make it through the awards without totally falling on her face on international television? Will Lizzie’s hyperactive animated alter-ego, who pops up periodically like a virtual desktop assistant, annoy the heck out of everyone over the age of 12? (The answer is yes.) No one is expecting cinematic innovation here, and the production doesn’t deliver it. Only the running time differentiates Lizzie McGuire from network fare. Director Fall even shoves the camera up Duff’s nose as if he’s shooting for the small screen. No matter. The movie is a slam-dunk for fans of the character, and parents should have little to complain about. Lizzie’s apparent fascination with boys and clothes may give modern moms pause, but you can bet your body glitter that our little lady will show some girl-power spunk by film’s end. 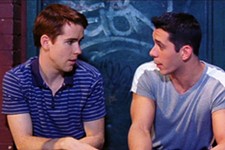 Trick
Its title bluntly suggests the impersonal, the emotionally detached, but that's just an illusion: Trick is as sweet and sublime as any recent movie has ...