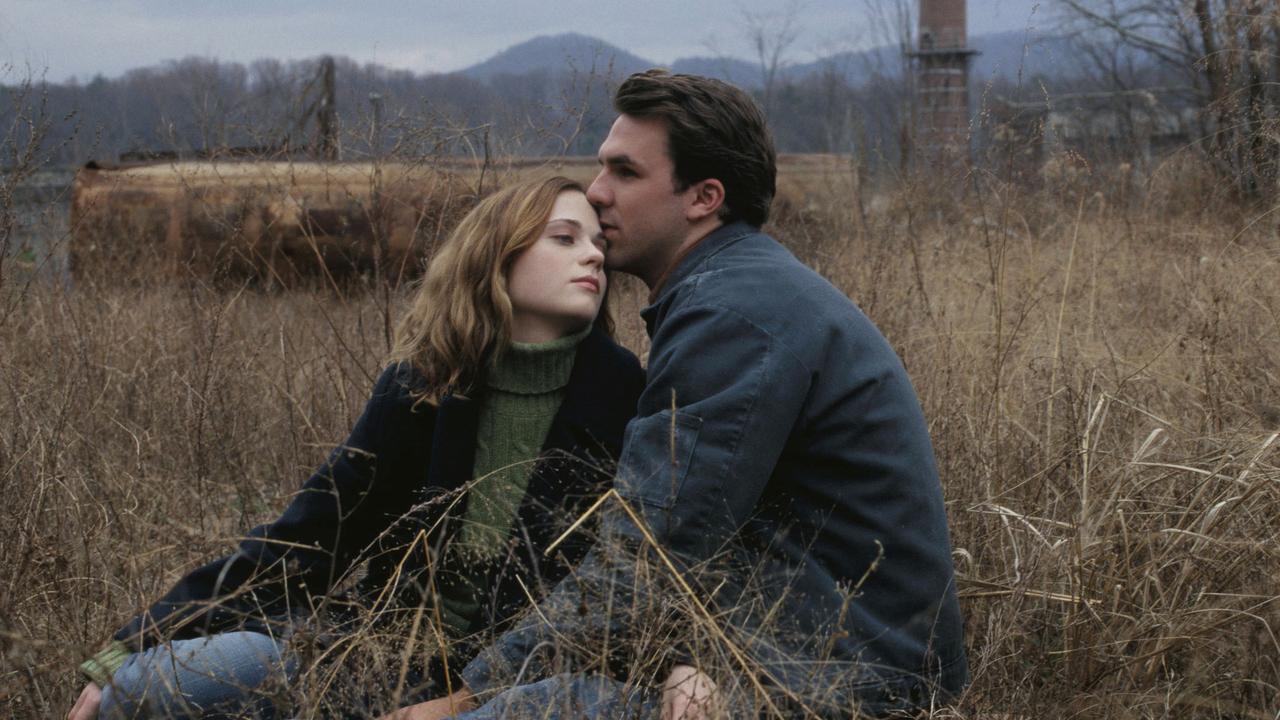 There’s a Silver Jews song called "Inside the Golden Days of Missing You" that laments the twin states of getting over love and getting over getting over love: "and then the feeling fades away, but you sort of wish it would have stayed." All the Real Girls is those words put to pictures, but not at first. It begins with a kiss, a first kiss that almost doesn’t happen, in a three-minute long shot of a boy named Paul (Schneider) and a girl named Noel (Deschanel). They want to kiss, but it’s complicated. She’s his best friend’s little sister, back in town after years away at boarding school; he’s older, the town tramp who’s never before felt this way about a girl. The first kiss is tender, halting, funny, and real. From there the courtship continues, and there’s a sort of sumptuous ache to knowing how lucky these two are, to get to that intimate, thrilling place with someone else. But then, luck like that usually runs out; it does for Paul and Noel, and that’s where another kind of ache, a brutalizing one, comes in, in knowing these two had something good that’s now gone – and how do you get over that? Why would you want to get over that? The miraculous thing about All the Real Girls – yes, miraculous – is in how relentlessly real it is in its dramatization of the beginning, middle, and end of "in love." Writer/director David Gordon Green’s impressive first film, George Washington, was beautiful to look at, but there was an artificiality to it, most especially in the dialogue’s pretty staginess. All the Real Girls is just as obsessively scripted – every word within is indispensable – but it’s also so much more naturalistic. The words are lovely, but believable, too, in the honest, grave, grandiloquent way young lovers get when they’re flush with first love. Huddled in bed with Paul, Noel whispers (in Deschanel’s flat but captivating cadence), "You’re the first person I’ve wanted to talk to for more than five minutes … ever." Later, stung from betrayal, Paul bellows, "If anybody smiles at me ever again I’m gonna freak out." Neither one means it, of course, but it doesn’t matter. In the moment, it’s the truth, and All the Real Girls is nothing if not a succession of moments – truthful, lyrical, and yearning – that resonate long after. It’s a movie made of moments, the antithesis of "plot-driven," but the sum of these moments is magnificent, the culmination of so many elements: acting, scripting, score (by locals Michael Linnen and David Wingo), and cinematography. Director of photography Tim Orr (who also shot George Washington) lenses this dying mill town in North Carolina’s Blue Ridge Mountains with an almost awesome reverence, turning the mundane into the remarkable – a puddle, a factory, an abandoned playground, the wrinkled, washed-out face of a middle-aged man who has known tremendous loss. Loss quietly but ruthlessly dominates the lives of the town’s inhabitants – loss of youth, beauty, virginity, love, livelihood – and most everyone is going nowhere fast and knows it. But Green has such compassion for these characters that, while their lives may seem small, even wasted, he approaches them with the utmost respect – from Paul’s mother (Clarkson), who makes a living as a clown and feels a lack of dignity for it, to Noel’s older brother Tip (Wingham), who still parties like a teenager despite being a full-grown man with a baby on the way. Paul, especially, is never pitied, although he’s deserving, having done everything in his power to undo the good things that come to him. Schneider (who co-authored the idea for the film with Green) isn’t a typical leading man; he’s big and lumbering, sometimes dopey, and wonderfully affecting in his portrayal of male insecurity. At one point, he says he just wants it to be like Noel never existed. The pain is too much. Paul thinks he wants the feeling gone, but even he, in his knuckleheaded way, is self-aware enough to recognize the miracle of what has passed – his first brush with real feeling and all the joy and agony it brings. As a viewer, to witness that – the fruition then combustion of love, the real feeling and then the grieving when it’s gone – that’s something of a miracle, too.