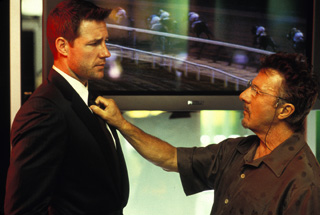 Confidence is the bastard child of so many con capers, from The Sting to The Usual Suspects to Heist, and never is that fact more grating than in the film’s opening minutes. Grifter Jake Vig (Burns) is on his knees with a gun to his head and a heavy (Chestnut) wanting to know how it all happened, how Jake orchestrated a $5 million scam, unsuccessfully, sold out his friends, and wound up scraping pavement with minutes left to live. What a groaning way to kick off a thriller; good thing the film flashes back posthaste to six weeks prior and the birth of this last big grift. Jake and his trusted team of con men (Giamatti and Van Holt, as well as Logue and Guzmán as undercover cops on the dole) scam $150,000 out of a crooked accountant; too late do they realize he’s the money man for a local crime boss named the King (Hoffman), an espresso-shooting nutjob with ADHD (that H, King points out with crazy, glinting glee, is for Hyperactivity – and don’t forget it). King wants his money back, so Jake offers a trade: He’ll pull off a $5 million job involving corporate loans, offshore banking, and a bunch of other stuff I didn’t get, then King gets his cut back and Jake’s team waltzes off with the remaining cash and bragging rights to the biggest balls in grifter land. The job is absurdly ambitious (and, like I said, largely incomprehensible), so Jake brings in some new blood, including a pickpocket named Lily (Weisz, in full femme fatale swoon), but can she be trusted? Can anyone be trusted? (No and no, but you know what they say about double negatives … ) Confidence gets a good workout with its many twists and crosses – double, triple, and then some. But the flow is forever being disrupted by flash-forwards to Jake on his knees again, explaining more and more, both to the guy at the other end of the gun and to the audience in an irritating tough-guy voiceover. The camerawork also frequently distracts; it strives for a rough-hewed, hard-boiled grit, but more often comes off like the cameraman had a case of the jitters. It all boils down to trying too hard, when everybody knows a good grift is one that appears effortless. A scene in which Jake conducts a textbook job at a jewelry store for the edification of rookie Lily is a beaut, all cool cat and sticky fingers. But that coolness is undone minutes later with a rote sex scene ripped from countless films before: washed in blue lights, framed in gyrating silhouettes behind a screen, and accompanied – I kid you not – by a trilling harp. Oh gawd. Similarly reductive is character development; halfway through, Jake starts babbling about karma and bad luck and jinxes, and one puzzles over which con film that was lifted from (so many to choose from …). And yet, with so many missteps, Confidence is still a good-natured yarn, owing mostly to the performances. The script and direction may labor heavily, but the performers look like they’re having a blast, from terrific character actors like Giamatti and Guzmán to the smoldering Weisz and Burns (who, with this role, finally quickens the glacially slow pace of unstiffening himself onscreen) to the two elder statesman, Hoffman and Garcia (as a rumpled, equally nutty special agent), both of whom frankly look like they’re about to bust out laughing – but in a good way. When they’re having fun, we are, too. When Confidence takes a cue from its title, it’s a fun ride; when it’s bargain-bin Mamet, it’s a bore. Fortunately, Confidence tips its scales more often to the former.