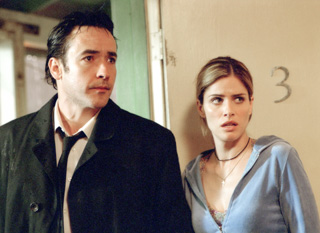 I had a dream a while back – not the one with Vanessa Paradis and Louise Brooks, mind you – and in that dream, hazy though the waking recollection was, I saw a vast American film market that had been joyously impacted by quasi-indies like Memento and startling, original shockers like The Blair Witch Project and The Sixth Sense. I suppose from a critic’s perspective this is akin to Ralph Nader’s ongoing dream of corporate responsibility and fair play, and about as likely to come true, but when you see the art form you love reduced year in and year out to a cookie-cutter assembly line apparently managed by the Hollywood equivalent of Keebler Elves on crack and overseen by sharklike bean counters who couldn’t tell you the difference between Cary Grant and Carry Nation, well, you’re apt to dream a little dream, and no thanks to Coreys Feldman and Haim. Identity, from James Mangold, the director of Cop Land and Girl, Interrupted, isn’t quite the answer to cineaste’s hastily muttered prayers that it might have been, but it is far and away the most original thriller to come out of a major studio (in this case Columbia Pictures) in a long while. From a script by Michael Cooney (whom I respect for simply having the cojones to put a title like Jack Frost 2: Revenge of the Mutant Killer Snowman on his résumé), Identity is a nifty little suspense film that begins moving in one direction and finishes up in an entirely new and unexpected locale. It’s worth noting that Mangold’s film is something of a Hitchcockian homage, and sports a Twilight Zone-like script that would have done both Rod Serling and frequent collaborator Richard Matheson proud. It begins with an unseen psychiatrist probing an equally vague patient for information about a crime and then, without warning, jumps to a seemingly unrelated scene: a coal-black country road at night, as 10 individuals make their way to a lonely, neon-burnished, and utterly anonymous motel to seek shelter from a driving rainstorm. The roads (heh, heh) are washed out, and their phones are dead, so there’s no chance of contact with the outside world. The seemingly random travelers range from John Cusack’s ex-cop-cum-limo-driver Ed, his faded movie-star passenger Caroline Suzanne (De Mornay), a cop (Liotta) transporting a killer (Busey), motel manager Larry (former Austin resident Hawkes), a family of three with a seriously injured party among them (McGinley, Leila Kenzle, Loehr), a prostitute (Peet), and a pair of bickering lovebirds fresh from Las Vegas (Scott and DuVall). Unbeknownst to them, there’s a killer on the loose among them, and before long their ranks are being unceremoniously thinned. And that’s all the setup you need, really, except to say that Cooney’s script and Mangold’s direction work in dark harmony to keep the viewer off-balance throughout. There’s a pleasantly eerie sense of unreality to the proceedings that pays off in spades in the end, and while Identity lacks the relative subtlety of, say, The Sixth Sense, it nonetheless keeps you stymied until the end, and then keeps you guessing some more. It’s a minor triumph – the resolution could have been played out even further, I think, and Jake Busey’s evil grin is becoming a psychopathic stock-in-trade and therefore a cliché – but a triumph regardless, chompers and all.