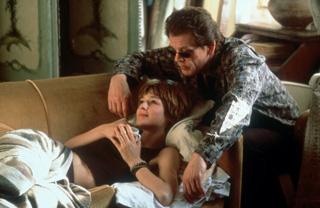 A loose retelling of Jean-Pierre Melville’s 1955 exercise in film-noir aesthetics, Bob le Flambeur, The Good Thief will play like a soothing balm to cineastes reared on Jean-Paul Belmondo and Jean Seberg, not to mention Roger Duchesne, the original inveterate gambler Bob, here played by Nick Nolte. To the cineplex-going mainstream, Jordan’s film will likely pass without a blip on their radar, which is a shame because it’s one of Jordan’s best films and almost certainly in Nolte’s top two percentile. Melville’s cool masterpiece was set in and around Montmartre, with the dapper ex-thief Bob trenchcoating his way through the darkened streets, on his way to That Last Big Score in between flirting with every jolie femme who crosses his path with that oh-so-cool unflirt the French apparently mastered during the Occupation, when no one was sure if flirting would be allowed for all that much longer. Jordan transposes the action to the French Riviera in Nice, and although something of the original’s noir-overload tone is lost in the translation to color, Nick Nolte’s Bob more than makes up for it. Of all the actors working today, only Nolte looks as though he died five years ago and nobody bothered to tell him, and he runs (or staggers) with the tatty grace of the walking dead. By this point his voice is little more than the expressive bass croak of a gutshot bullfrog – he sounds as though he just did a double-shot of one part sea-washed foghorn and two parts rusty musket balls, with a grave-dirt chaser just for kicks. Bob prowls the subterranean gambling halls and fleshpot whore bars on his way to, presumably, Hades, but he’s a cool cat with style to spare, and he can afford to dawdle on the way. In between winning and losing money like most folks go through napkins, he spends his long, long nights shooting up smack and taking an interest in the new hooker in town, Anne (Kukhianidze), a 17-year-old Ukrainian expat who oozes enough blasé, waify sexuality to lubricate a thousand handguns. She’s sexy and 17, and Bob becomes a father figure, albeit one to whom she frequently turns to for fleshy gratification and is – woe to her – forever rebuffed. There’s also local cop Roger (Karyo, from The Core, given far more to do here), who keeps tabs on Bob in the sort of "Who’s your buddy?" manner that only the French can do. Eventually, the possibility of a last big heist, one which involves artwork, presents itself to Bob, but Jordan’s film is less concerned with the mechanics of thievery than it is with the thief himself and his relationship to his environment. Bob could be called a lower-echelon crook, but that would be missing the point; he’s a gentleman gambler, wastrel, and sage protector of fallen women. As Jordan has shot it (with cinematographer Chris Menges of The Killing Fields), both Nice and Bob have seen better days, though they both carry a sort of decadent luster and a très cool ability to charm the skirts off (or on) anything that moves. A character study of both town and junkie, The Good Thief has style to burn. It’s a sticky-suave erotic portrait of a man swaggering his way to the bottom of the proverbial barrel.