Chasing Papi is the boisterous Latina version of James Toback’s silky boho study of two-timing, Two Girls and a Guy. However, Chasing Papi opts for silliness and slapstick where Toback aimed for compassion and endless talk. Each movie also chases a different audience. Using stars ripped from the soundstages of telenovelas and popular music, Chasing Papi targets Latino viewers – a niche audience that comprises the fastest-growing segment of the North American moviegoing populace. All of this makes sense and sounds good on paper, but the final reality is that Chasing Papi is a loud, messy cascarone of a movie that is not likely to have much appeal to any moviegoing interest group, no less a wide audience. Verastegui plays the Papi Chulo of the group – a handsome, successful advertising executive named Tomas who is romancing three different women in three different cities. There’s Lorena (Sanchez, recently seen in Basic and Rush Hour 2) in Chicago, a buttoned-down civil rights attorney who reads poetry with Tomas (and I have to give the movie points here for citing Pablo Neruda). Dollars to doughnuts, her hair will come down before the movie’s over and reveal her inner passions. Cici (Vergara) is a brassy cocktail waitress in Miami, cast somewhat in the Charo mode. Cici’s chichis are the focus of attention here. Last up is Patricia (Velasquez), a heritage-denying New York City heiress with blue contact lenses who would like nothing better than to fling her silver spoon back in her mother’s face. Motivated by the words of popular television astrologer Walter Mercado regarding their love forecasts, all three women descend simultaneously on Los Angeles to surprise their Papi. Tomas spends most of the movie in an alcohol- and sedative-induced fog, leaving Chasing Papi to become a message movie about female solidarity and friendship. A couple subplots about a beauty pageant and some illicit cargo in the trunk of a car are poorly developed. The basic problem with Chasing Papi is that it seems cobbled together by committee. Produced by Forest Whitaker’s Spirit Dance Entertainment, the movie features four screenwriters and lots of untested crossover talent. Director Mendoza (whose TV credits include the comedy hits The Chris Rock Show and The Bernie Mac Show) also fails to make a smooth transition from TV to screen in her first feature-film outing. The movie’s busy soundtrack is by the Miami Sound maestro Emilio Estefan Jr., and during the film’s climax the three women get to dance onstage with Sheila E. and her band. Chasing Papi ultimately sinks under the weight of its good intentions. It’s like watching Univision or Telemundo on the big screen. 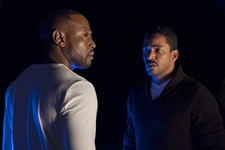 Act of Valor
Navy SEALs conduct a rescue mission in this film that employed actual soldiers and their experiences in its making.