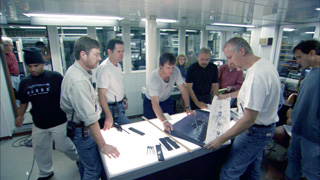 Ghosts of the Abyss

Say what you will of the hokey love story, the "aw-shucks" dialogue, that irritating kook with the big fat diamond – James Cameron’s Titanic was a sight to behold if only for its footage of the underwater wreckage. His new film, Ghosts of the Abyss, expands upon Cameron’s already impressive earlier documentation of the downed ship, utilizing highly advanced technology to produce a 3-D documentary that examines the ruins of the Titanic with a staggering nearness. Through a series of dives, Cameron and his team of scientists and historians used high tech underwater cameras and two remotely operated vehicles (called BOT 1 and BOT 2, then later personalized as Jake and Elwood) to weave in and out of the Titanic, fixing on the crumbling remains of the grand staircase, Molly Brown’s wrought iron bed, and a bowler hat, still perched on an unknown passenger’s dresser. The ship is falling apart (experts believe Titanic will be largely unrecognizable in a century), but these few unaltered glimpses humanize the exploration, as do various re-enactments – a normally goofy practice that is made less so here with the shimmeriness of 3-D giving the actors a ghost-like quality. The re-enactments especially help in orienting the viewer on the ship – a shot of Captain Smith at the wheel dissolves into the previously unrecognizable wreckage – and one can better fill in the blanks of the decomposing ship. The 3-D itself is a bit hit or miss: Although it’s quite thrilling to have the ship’s helm lumbering right at you, it’s just distracting when a crew-man’s gigantic hand comes swatting at you from the side of the screen. Also, it’s best to situate yourself in the middle of the row; a seat at the end will most likely leave you feeling cross-eyed for an hour. (The documentary is also playing at various IMAX theatres around the country, but not, alas, at Austin’s.) Titanic’s featured player Bill Paxton, who went on several dives, provides an Everyman’s point-of-view, as well as some lighter moments (most amusing is his nervous preoccupation with the oxygen supply as the submersible drops to the bottom of the ocean), but for the most part Ghosts of the Abyss is an educational outing, shedding light on a deep, dark place most of us have only imagined.