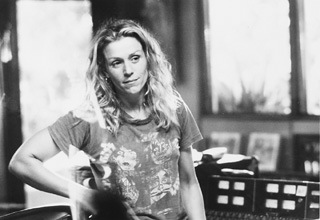 In the promotional push for Laurel Canyon a couple of months ago, it seemed like Frances McDormand was everywhere, with features in The New Yorker and The New York Times detailing how this role – as Jane, a hard-living rock & roll producer – was something special, the first time McDormand had been so overtly sexual in a role (and comfortable in it, too); what a shift for this actress, most famous as the straight-talking sheriff in Fargo; and isn’t it marvelous that she’s fortysomething to boot? Well, sure, but none of that really matters. Sex and aging are integral components of the role, but that – and whatever hype preceded the film’s release – are trumped by what is, by my estimation, a fact simply not up for debate: The lady’s a badass. Her Jane is a lioness, a middle-aged woman who feels like anything but, who has made mistakes, who has loved too much and all the wrong people, but can still rock harder than anyone in the room. The sexuality doesn’t feel overmeditated; it simply is. She simply is, in leather pants, washed-out T-shirts, and just-right bleached and tousled hair. The performance is remarkably subtle; Jane’s rocky history is very rarely spoken about, but rather revealed in the way she carries her body, the way she passes the pipe, the way she playfully slaps her much younger lover. Director Lisa Cholodenko could fill up a whole movie with the way McDormand sips her whiskey sours, but alas, she goes the more conventional route and inserts a plot. The plot has nothing to do with Jane – or everything to do with her, but produces nothing for her to do. She is the catalyst for the film’s two leads: Jane’s son Sam (Bale) and his fiancée Alex (Beckinsale). The two have moved to California and into Jane’s Laurel Canyon home, expecting it to be empty and finding Jane still there recording tracks for a British band, the lead singer of which, Ian (Nivola), she is bedding. The thrust of the film is in the slow wakening of Alex and Sam, two straitlaced science types with a minimum of communication skills and a maximum of button-down hang-ups. Sam grew up with the rock-star lifestyle and is actively repulsed by it, but Alex, new to the life, is intoxicated, not unlike the lead in Cholodenko’s first feature, High Art, in which a meek mouse of a woman dives into the boho existence of her neighbor upstairs, an art photographer undone by drugs. That film, a milky masterpiece, re-created the two, sometimes commingling, worlds of art and drugs with an almost brutal authenticity. That authenticity is strangely lacking in Laurel Canyon, although Cholodenko’s exquisite eye for framing remains uncorrupted. Laurel Canyon is often visually captivating, but the camera is fixed on all the wrong faces, most egregiously on the wooden Bale’s. His Sam speaks in a low drone, more a parody than a portrait of frustrated desires and mommy issues. The film is saddled with two dullish subplots regarding Sam, one of which is his temptation to a coworker (McElhone). Alex, too, is buckling, wooed into a three-way kiss with Jane and Ian, and loving every minute of it. The heart of the film, ostensibly, is whether Sam and Alex can stay together, survive all this exoticism and excess as a functioning unit. Yet, that’s where the trouble begins: They’re but a functioning unit, absent – at least to my eyes – of any great love for the other. The opening scene settles the matter immediately, with an awkward bout of lovemaking writ in needling questions: "Is that OK? Do you want me to stop? Was that good for you?" Not encouraging stuff for a couple planning to spend their life together – and certainly not enough to convince the audience they’re worth rooting for. Alex would do better to forget the guy in the stiff shirt and watch how Jane drinks her whiskey sours. We could all learn something from her example. 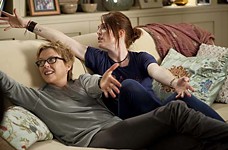 The Kids Are All Right
A grin-cracking great portrait of a modern American family in minor and major crises.