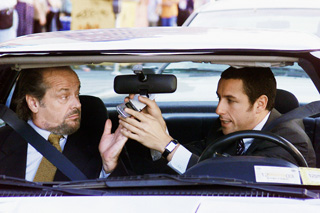 It’s probably a good thing that Jack Nicholson didn’t get the Oscar last month for his performance in About Schmidt, because right about now he’d have a lot of explaining to do: How could this new comedy, in which he co-stars with Adam "Movie Clown with the Midas Touch" Sandler, be so blandly unfunny and narratively nonsensical? And how about that other Oscar winner Marisa Tomei, signing on for thankless girlfriend duty? Didn’t anyone actually read this implausible script by first-timer David Dorfman, or was everyone counting on the "movie magic" of this top-flight ensemble to carry the day? No matter how this miscalculation occurred, it’s a miscalculation nonetheless – though I doubt the movie’s flaws will hurt it at the box office. Certainly there are some funny moments in this ludicrous set-up that has Sandler essentially playing straight man to Nicholson’s over-the-top maniac. As the story’s Dr. Buddy Rydell, Nicholson slips into his familiar Wild Jack persona of movie lore and gossip legend, which allows Sandler to play the passive-aggressive nebbish that is the cornerstone of his film career. The film’s plot is essentially revealed in the trailers: Milquetoast Dave Buznik (Sandler) is sentenced to anger management therapy for a misunderstanding on an airplane that is interpreted as air rage. His therapist, Dr. Rydell, takes the unorthodox approach of moving in with his client and sticking by him 24/7 (except for when he’s not … note to screenwriter). Little does it matter that Rydell’s treatment seems ill-designed for the quelling of anger and is more in line with assertiveness training. The film’s final revelation of the deus ex machina that gets the plot rolling is absurd and unbelievable, written off with the kind of cynicism that demeans viewers as docile cows who will swallow any foolishness that is put in front of them. Director Segal (Tommy Boy, Nutty Professor II: The Klumps) also brings nothing to the table as commander in chief of this comic whirlwind. The movie abounds with cameos and bit parts: John McEnroe, Rudy Guiliani, Bobby Knight, Woody Harrelson as the ugliest transvestite on Earth, Harry Dean Stanton as a blind man, John C. Reilly as the bully from Buznik’s childhood who has since become a Buddhist monk, and Heather Graham as an oversexed kook. Also, there’s Buznik’s support group members, among whom are a crazed and bug-eyed John Turturro, a swish Luis Guzmán, and two porn-star lesbians who grab each other and kiss at every opportunity. Sandler fans who were turned off by Sandler’s more dramatic foray Punch-Drunk Love will probably welcome this return to greater inanity. Whereas the passive-aggressiveness inherent in the character Sandler played in Punch-Drunk could be scary when his anger became unleashed, Anger Management returns us to the rage-filled Sandler persona that’s non-threatening and comic. Sandler has become one of our primary symbols of the modern rage-repressed American male. Let’s hope that one day he will learn to channel that rage to greater effect.