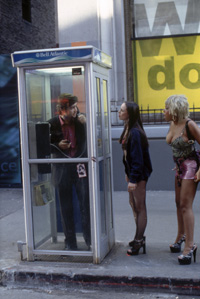 Phone Booth boasts a nifty gimmick: shoot almost an entire film (albeit a brief film at 81 minutes) in the confined location of a new York City telephone booth. The plot mechanics devised to keep a single character trapped in there for so long – a nutty sniper with a near-inscrutable plan – are carried out in such a riveting, urgent manner that the entire movie mostly passes before the viewer has a real chance to notice that a lot of the movie’s elements strain credibility (for starters, try finding an actual phone booth in New York City). It’s a movie perfectly designed for tossing back popcorn (the jumbo kind so you don’t have to leave your seat during the show); not until later do you get the empty feeling that you’ve swallowed an entire bucket of popped air. Be that as it may, Phone Booth’s kineticism keeps us glued to the screen the whole time (except, maybe, for the anticlimactic "confession" and denouement). The movie’s premise is said by screenwriter Larry Cohen (himself no slouch in the gripping-movie department, having directed It’s Alive! and God Told Me To) to be a project that Hitchcock had long desired to develop. However, it took Cohen all these years to come up with a plausible storyline. Schumacher, after a series of dead-end movies, seized this opportunity to show his stuff, and the decision to film the movie on the quick and on the cheap (which may be more Fox’s decision than Schumacher’s) actually complements the film’s sense of urgency and compression. There is no doubting the enormous contributions to the movie’s success made by cameraman Matthew Libatique (Pi, Requiem for a Dream) and the actors. Libatique’s constantly roving camera gets an impressive workout, bringing us in real tight and close to the characters’ anguish and then whipping wide and frantic as it scopes the surrounding 360 for any sign of a sniper’s lair. Schumacher’s ace in the hole is his Tigerland star Colin Farrell who, in addition to being this year’s breakout It Boy, crackles with the kind of ramped-up onscreen dynamism that allows him to appear in virtully every shot of the film and not wear out his welcome. Farrell’s hyperactivity is nicely complemented by the gentleness of Forest Whitaker’s police captain who draws the case. As the sniper, Kiefer Sutherland lets loose his feral sneer: Appearing in only one scene of the movie near the end, Sutherland is only present through his voice. It’s hard to imagine a sniper actually holding a rifle scope steady while delivering some of this character’s snarling invective, although the movie should also get a boost from Sutherland’s recent 24 fame. Thematically, and in its visual use of split screens, Phone Booth has more than a little in common with 24, although the movie’s delayed release makes that a matter of coincidence rather than planning. Originally intended for release last November, the real-life Washington, D.C. sniper case caused Fox and the filmmkers to become skittish about the film’s propriety within that climate. It’s good to know that the coast is now clear for this tension-inducing tale.