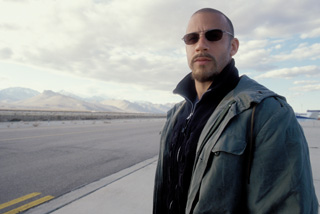 With his preternaturally stoic expression -- a look that falls just shy of seething even when he's surrounded by puppy dogs, birthday cakes, and rainbows -- and his taciturn verbal mannerisms, which would have made Andre the Giant seem chatty by comparison, Vin Diesel seems to be shaping up as this generation's answer to Clint Eastwood. So far, the notoriously press-shy actor has displayed little of Eastwood's wry sense of humor (although, to be fair, the vast majority of that sort of thing made its appearance later in his career -- don't expect to see the shorn galoot sharing screen time with an orangutan any time soon), and Diesel's narrow choice of scripts, which have run from action to sci-fi action and back again, doesn't do much to support the notion that he's attempting to broaden his playing field either intellectually or creatively (his funky vocal turn in The Iron Giant notwithstanding). Still, the audience's rapt attention to and appreciation of A Man Apart was palpable. Clearly Mr. Diesel is tapping into something, although whether it's some primal cinematic yearning for hulking bald men with whisky-and-cigarette voices or just the result of clever marketing is open to debate. Eastwood, however, can rest easy in Carmel; Diesel is still many laps behind him when it comes to holding our attention without the flimsy trickery of staccato bursts of onscreen violence or profane, epithet-strewn mini-soliloquies -- the big ox. A Man Apart began life with the title El Diablo, which apparently sounded too much like a Vin Diesel film for the producers. The problem now is that the retitled film sounds like a Godard film, and while it flirts with an existential tone in its depiction of a good cop gone over the edge in the wake of his wife's murder by drug kingpins, the idea that Diesel gives good angst is like hitting up the Cookie Monster and expecting cr'me br'l'e. Diesel's character Sean Vetter and his partner Demetrius Hicks (Tate) are former gang bangers heading up an elite LAPD undercover narcotics squad. They parlay their knowledge of "the streets" into useful strong-arm tactics against the Mexican cartels that continuously flood their town with cheap product. When they finally nab the Big Guy (Silva), a new, extremely homicidal thug by the name of El Diablo begins slicing and dicing his way through the ranks with an eye toward initiating a brand-new drug pipeline from Tijuana to L.A. Eventually he crosses swords with Vetter and Hicks and then, of course, the fun begins in earnest. Director Gray has a snappy style, and A Man Apart moves swiftly (discounting those giggle-inducing angsty bits) and with a great deal of gutter panache. There's a flurry of nice touches: Silva's sage, cutthroat kingpin may be clich'd but he's still fun to watch, and the bouncy Tate -- Jerry to Diesel's Tom -- is likewise a hoot. But the film falls just shy of both Diesel and Gray's mark, which, presumably, was to afford a certain shade of respect to Diesel's usual knuckle-dragging theatre of the fist. Close, but no cigar. Still, it's nothing but a vertical move for the actor's career, and one that may well broaden his fan base past the feminine and mooky. Good for you, Vin.