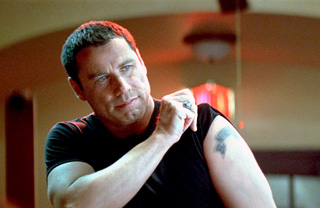 It begins in a muddle and ends in confusion. In between, Basic takes more silly twists than any that might be on display at a Chubby Checker look-alike contest. Preposterous in the extreme, this military foul-play actioner/whodunit may get to coast a bit due to the current climate of good will toward anything in fatigues. And though he never wears military garb in this picture, John Travolta in his first scene appears singing in the shower and then covered by only a towel. (Singing and half-nekkid: That’s how we like him.) But, quickly, his civilian character Hardy is called by an old Army Ranger buddy (Daly) to help solve a delicate crime that’s been committed on the base he now commands. Hardy is billed as an expert at "getting inside the heads of others," and the official base interrogator (Nielsen, in a sometimes-on and sometimes-off Southern accent) is clearly getting nowhere. The movie then progresses in a fashion I hesitate to call Rashomon-style for fear of elevating the material. Wily and unconventional, Hardy interviews each of the involved parties, but each provides not really his own perspective but rather a diversionary narrative screen meant to lead the interviewer down another blind alley. Director McTiernan has had something of a downward career trajectory (Medicine Man, The Last Action Hero, Rollerball) after initially hitting it big with Bruce Willis in Die Hard. Clearly, the reading of scripts is not his long suit. Additionally, most of the movie occurs in the midst of a thundering hurricane, causing the actors to bellow barely heard lines – which does nothing to help the movie’s general confusion. Travolta and Jackson (who appear together in only one scene) have a couple of fun, over-the-top moments, and Ribisi gets to chew scenery (from a hospital bed) like nobody’s business. But honestly, how many twists can one movie take? The debatable answer to this question will probably be the only enduring quality of Basic. 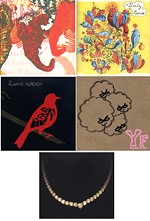 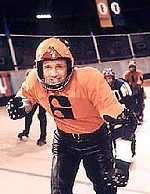 Rollerball
John McTiernan has never had a problem choreographing powerful, knock-down action sequences before, so why does Rollerball feel like the work of a grade-Z hack? ...