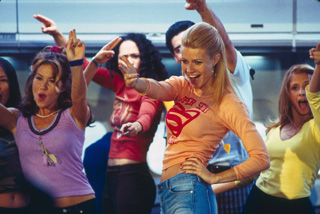 View From the Top

No doubt it gets stuffy winning Oscars and wooing onscreen suitors with a stiff British accent, which must explain why Gwyneth Paltrow signed on for this lowbrow comedy. What better way to show a serious actress' range than with spandex and high-volume hair? Paltrow plays Donna, a small-town girl who dreams of a life in the sky, servicing first-class passengers on route to Paris or Prague. She gets there eventually, working her way through a creaky Nevada airline with her best gal pals (Applegate and Preston) and then flight attendant school for the top-line Royalty Airlines. Mike Myers pops in as a lazy-eyed trainer at stewardess school, a conceit that distracts more than it amuses – doesn't he know his eye can get stuck like that? Questions like this actually help the film move along more rapidly; there's so little happening onscreen, the mind can dance off to happier places, where one might ponder, in addition to the well-being of Mr. Myers' left eye, what the hell is George "nobody can eat 50 eggs" Kennedy doing in a wordless cameo as a plane passenger? The trouble is – OK, the trouble begins – with Paltrow's character. She's meant to be a wide-eyed innocent, but mostly she just comes off as dim. To be fair, none of the characterizations – one-note to a T – stick; how could they when characters are defined by the highlights in their hair, and an entire romance is built around the magical moment when boy meets girl, boy fixes girl's broken bikini with a twisty-tie from a loaf of bread? It's symptomatic of a frustrating trend in movies – laziness, really – in which the story is told in such shorthand that the audience must rely on assumptions alone, clues picked up from countless better films seen before. Throw two extraordinarily good-looking people on the screen (here, Paltrow and Mark Ruffalo), toss in some hijinks of the twisty-tie like, and bam! We must be convinced. Call me a grump, but I'm not; I'm not sure the filmmakers are either, which I suspect is why the romantic comedy plot – a big fat flop – drops out midway to make room for attempted slapstick. Attempted. Honestly, all this is pussyfooting around one irrefutable fact: The damn thing is boring. Dull as dirt. Despite the many fine actors involved, View From the Top is a third-class production through and through and, frankly, I'd rather be pelted in the head with stale, salty peanuts than sit through it again. 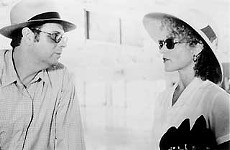 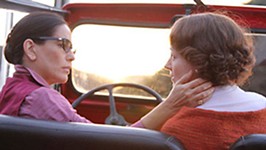 Flores Raras (Reaching for the Moon)
...