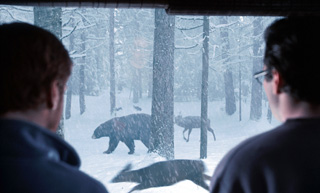 Dreamcatcher, an adaptation of Stephen King’s unwieldy horror/sci-fi novel of the same name, is either a canny metaphor for the country’s current paranoia regarding terrorism and the invisible other, or the single most awful genre film since Starship Troopers. The trouble is, it’s hard to tell which. Like its source material (the script was written by William Goldman, who also did King’s Hearts in Atlantis and Misery), the film is a sprawling mess that churns, Blob-like, in every direction. It’s a horror film, an alien invaders flick, a Big Chill-ish meditation on friendship and the past, and a plague film along the lines of Outbreak. What it isn’t is very focused, or cogent, or, for that matter, scary. Goldman’s script sticks close to the novel: Four adult friends – Henry (Jane), Beaver (Lee), Jonesy (Lewis), and Pete (Olyphant) – meet regularly for years in a cabin in upstate Maine to hunt and bond. When they were kids, they formed an unlikely alliance around a mentally handicapped boy named Duddits (Wahlberg) who somehow (the film never explains how) gave them psychic powers. This year’s trip to the woods ends up in the midst of an alien invasion headed by "Mr. Gray," who takes over Jonesy’s body and has to fight off the militaristic advances of the lunatic Col. Curtis, a bushy-browed, cigar-chomping killer of aliens (he’s been doing it for a quarter-century, the film tells us) prone to shooting his own men when they falter. As in King’s book, the aliens come in two shapes: the vaporous metamorphs of Mr. Gray and a repellent, wriggly form that looks like an engorged garden snake with a mouthful of darning needles. The latter, dubbed "ass weasels" by one character for their penchant for remaining dormant inside a host until they burst forth from the unlucky victim’s backside in a flood of blood and bowel. Either way, humanity is ripe for the plucking, but Goldman’s script, which makes much of the aliens’ abilities (they’ve crash-landed in the Maine forest in a ship that looks as big as the ones in Independence Day, which makes you wonder how Col. Curtis and his off-the-books alien assassination commandos have kept these buggers a secret from the rest of the world for so long), leaves enough loose ends lying around to knit a sweater. You can feel Kasdan struggling for some sort of cohesion to the proceedings, but the script (laced with lines like this one, from Freeman: "These people shop at Wal-Mart … and never miss an episode of Friends. They’re Americans and I hate to slaughter them. But I will,") is more deadly than any bug-eyed monster, and things that worked, to a degree, in the book, such as having the alien-infected Jonesy speak in two distinct voices (one of which is British!), only generate giggles in the audience. So much is going on, and so many bizarre and seemingly random subplots collide in Dreamcatcher, that the film feels like some crazy patchwork quilt sewn by a schizophrenic seamstress. It’s not only confusing, but dull, as well. 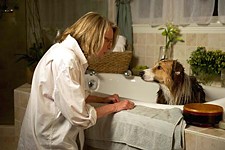 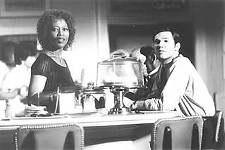