There are bad movies, and there’s Boat Trip, a puerile comedy so appalling and unfunny, it’s like contracting the Norwalk virus at sea. Twice. Writer-director Nathan, a first-time helmer, seems to have in mind one of those laff-riot "vacation" films of the halcyon 1980s, like Private Resort or Going Overboard: the broad stereotypes, the jiggling bikini babes, the scatological gags, and ever so many slips and falls into a pool. Not even Richard Roundtree – who shows up too briefly and does little – can save this fiasco. When Jerry (Gooding Jr.), an ostensibly likable dude in love with a gold-digging harridan (Fox), gets dumped, his obnoxious friend Nick (Sanz) strong-arms him into taking a cruise to meet chicks. A series of contrivances land the pair on board a voyage designed for gay cruising (in both senses of the word), where they goggle at leathermen and ice sculptures shaped like erect, ejaculating penises. But surely all is not lost: Nick shoots down a helicopter carrying the statuesque "Swedish Suntanning Team" (female) and Jerry falls for a muy caliente Latin dance instructor (Sanchez). Will true love prevail? Will Jerry learn the words to "I Will Survive"? Will Shaye fellate an aluminum baseball bat? (Unfortunately, yes to all three.) If you really want to see a bare-assed, furiously masturbating Gooding shoot his wad out a stateroom window and onto the cheek of an elderly traveler, you’ll get your chance here. I won’t stand in your way. But the film is so strenuously unfunny, it’s hard to even feel sorry for its cast. Needless to say, the flamboyant, fuh-laming party boys on board, who clap or snap or vogue at 45-second intervals, aren’t going to win Nathan any accolades from GLAAD. But no one else makes out any better – not any of the principals, who are all actors of color, not any of the women, not the elderly, not fat people, not anyone. More critically, the jokes just aren’t funny, though Moore seems to be enjoying himself as a sophisticated sugar daddy trying to land Sanz (we’re not sure why). There was cricket-chirping silence in the theatre from the first puke joke to Gooding’s last plunge in the pool. 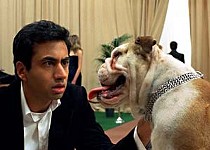