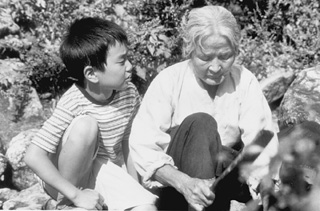 It’s difficult to warm up to the 7-year-old Korean boy in the sincere but awkward The Way Home – for the most part, he’s nothing more than a spoiled brat, a poster child for corporeal punishment. Of course, it’s easy to see why the kid might be unhappy. Accustomed to the luxuries and comforts of living in Seoul, he is unceremoniously dumped by his mother to live with his mute grandmother (Kim) for a few months in a ramshackle hut outside a small and impoverished rural village, a place where batteries for Nintendo games and Kentucky Fried Chicken meals are not to be found. While the patient old lady attempts to care for and please him in every way imaginable, the ungrateful Sang-woo (Yoo) is downright rude to her, throwing tantrum after tantrum. The Way Home attempts to develop a growing relationship between these two people bound together by circumstance with a sense of neorealistic pathos, but – with the exception of the subtle use of the act of threading a needle – it’s clumsy in its execution of this familial bond. A large part of this awkwardness is due to the limitations of the two actors. The young Yoo has a pleasant enough face, but he has two expressions: a beaming smile and the more prevalent pout. Unlike those of his more sophisticated American counterparts (Haley Joel Osment, Jack Rovello, to name a few), Yoo’s emotive skills are too one-note to elicit any real empathy. While the aged Kim looks and acts the part – her stooped figure, arthritic hands, and weathered face are as authentic as it gets – her lack of any prior acting experience limits her ability to convey anything but a stoic kindness. (In fact, Kim had never even seen a movie at the time she was discovered and chosen to appear in this film.) To her credit, director/screenwriter Lee avoids the treacly sentiment that no doubt would have emerged in any Americanized version of this story. There are no dramatic revelations, no bittersweet moments here. And while there’s a lot to be said for that, there’s also something to be said for wanting a little bit more.