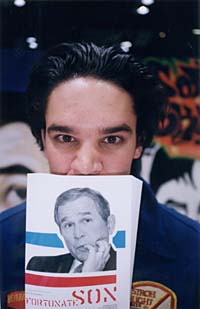 Remember that unauthorized George W. Bush bio Fortunate Son that was pulled by its original publisher, St. Martin's Press, during the 2000 presidential campaign because of allegations of Bush cocaine use in Houston during the Seventies? Remember how the author, James Hatfield, was vilified because it came to light that he was a former felon and then committed suicide a year after the brouhaha began? If you have even the vaguest of recollections about this sorry story, you'll be anxious to see this documentary about the whole affair, and appreciate its focus on Soft Skull Press publisher Sander Hicks, who republished the book amid storms of controversy. If you're not aware of the whole mess, that's all the more reason to see this award-winning film. It’s a fascinating tale that begins with the pulling of the book by St. Martin’s after commentators noticed that Hatfield seamlessly conflated certain factual material with legendary rumors and unsourced quotes, creating in this "quickie" biography a clip job that was subject to deserved scrutiny. However, when it was revealed that Hatfield had served time for attempted murder, St. Martin’s yanked the bestseller and burned their remaining copies. That’s when the punk-mined publisher Sander Hicks came into the picture and republished and promoted the book with a new forward by Hatfield. Yet, once again, Hatfield was met with libel charges from one of his old business partners who took issue with statements made in the forward. In addition to this documentary’s revelations about the sometimes-torturous intersections between the worlds of politics and publishing, the movie also becomes something of a character study of its two key figures: Hatfield, the ex-con author of dubious emotional stability, persecuted for either sloppy scholarship or hurtful blows against the empire; and Hicks, the renegade publisher who sports a mohawk and works out of the basement in the building where he works as the superintendent. Also revealed in this movie are some of the things obscured by the ensuing ruckus over the book’s more lurid controversies: details of Bush Junior’s financial boondoggles and blueprints for his political future. Hatfield and Hicks make the oddest of couples, and in this sense the movie becomes a study of the gambles of the publishing world, offering a case study that exists apart from all the movie’s political ramifications. Local filmmaker Bob Ray also had a hand in shooting some of the footage for this film, a documentary whose content might possibly have further reach than the book.