Amandla! A Revolution in Four-Part Harmony

(This Chronicle review is reprinted from an earlier screening of the film at the Austin Film Festival 2002.) The history of apartheid in South Africa is an ugly story, but one that needs to be told. The documentary Amandla! finds a way to impart this sad history while raising our spirits at the same time. The movie examines the integral role music played in nurturing, spurring, and sustaining the revolt against apartheid during the entire latter half of the 20th century. Whether to fuel protest or assuage grief, music was essential to the movement’s drive. As internationally renowned artists such as Abdullah Ibrahim, Miriam Makeba, and Hugh Masekela join other South African artists in unfolding the history of this nationally specific music, they consequently also relate the history of this national political disgrace. 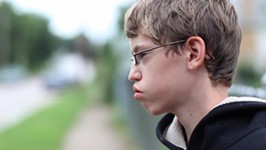 Bully
The documentary Bully is devastatingly effective when it comes to putting faces on harassed children and giving them a voice.