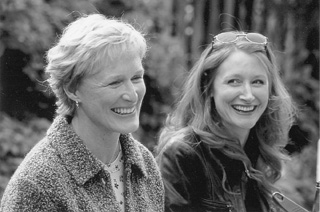 The Safety of Objects

A guitar. An antique chest. A Barbie doll. These are some of the objects that fill (but do not fulfill) the lives of the four families banging up against each other in The Safety of Objects, writer/director Rose Troche’s loose adaptation of the A.M. Homes short-story collection. The opening credits ingeniously lay the groundwork for this study in suburban soul-suck: From the minimalist, miniature doll houses, faceless doll figures are trotted out and introduced. At face value, they could pass for Good Housekeeping’s nuclear families of the year; within minutes, however, any illusions of normalcy are shattered. Simply put, these families are fucked in the head. How and why, exactly, is not immediately clear; the clues are in the objects. That guitar is a hand-me-down from brother Paul (Jackson) to sister Julie (Campbell). Paul is comatose, possibly brain-dead, the result of an accident only fully explained at film’s end; in his absence, Julie takes up the guitar and her big brother’s habit of etching a mark for each new sexual conquest on the guitar’s back. Before the accident, Paul was falling for an older woman and single mother named Annette (a luminous Patricia Clarkson); that antique chest is her ex-husband’s, and what a release when she smashes it up in the front lawn. Annette’s daughter Sam (Stewart) plays with the boy next door, Jake (House), but he’d rather play with his sister’s Barbie doll, who communicates with Jake in hushed, seductive coos – weird, yes, but also an inspired way of giving voice to the sexual confusion of puberty – and who would have thought that when that plastic doll is finally silenced it would feel like a death? These families’ stories continue to intertwine in surprising ways, most especially in a Hands on a Hard Body-like subplot involving Paul’s grieving mother (Close) and Jake’s so-very-very-close-to-meltdown father (Mulroney), contestant and coach in an endurance contest. At first, the film’s start-and-stop progression is awkward, but once all the stories get going, The Safety of Objects produces a quiet rush – where will they go next? How much can they hurt the ones they love? How will they ever recover from all this heartache? The denouement is too pat – and to a certain extent, so is the very premise; the banalities of suburbia are already firmly established in art – but the terrific ensemble acting and Troche’s genuine, nonjudgmental interest in exploring the weird places wounded people go, both internally and externally, amount to an insulated but moving portrait of the real nuclear family – kinda nuts, hanging by a thread, but bound by love nonetheless.