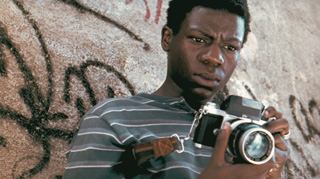 Why does the chicken run down the road? Because in the City of God – a housing project in one of Rio’s poorest slums – the rules of the game demand that its residents either run or be run over. A chicken’s mad dash from the boiling pot is seen in this Brazilian film’s opening and closing sequences. By the film’s end, its story has come full circle, but the only real progression we observe is the community’s steady decline from bad to worse. The movie, which is based on a popular Brazilian novel by Paulo Lins, follows a cluster of characters from the late Sixties to the early Eighties – from the moment families first moved into this newly built housing project on the outskirts of Rio to the point, years later, when the decaying slum is under the trigger-happy thumbs of the all-powerful drug lords. The only laws in the City of God are those which serve the drug trade: The police are ineffectual at best, enemies of the citizens at worst. The project’s residents have few expectations of ever escaping the slum’s confines: Unlike the aforementioned chicken, their fight-or-flight survival instincts have been practically bred out of them. City of God, like the place for which it’s named, is often grim and dire: Disturbing images of things like children shooting other children sear themselves indelibly into the viewer’s brain. But director Fernando Meirelles also imbues the story with shards of hope and transcendence and has the technical artistry to find the beauty that lies within the rawness of his images. The narrative is skillfully cobbled together in a way that circles back on itself, beginning with the present and then delving into the back history of the characters and their community and how the projects came to be such a godforsaken place. There is no real beginning, middle, or end, however, just a road that might as well be marked with a sign that says "No Exit." At the heart of the story is Rocket (Rodrigues), a schoolboy who is enamored of the gangster lifestyle of his big brother and his pals. But on the day he witnesses his first street death, he also sees a camera for the first time, and then and there catches the photography bug – an interest that could provide his avenue of escape. The film’s restless and jagged camerawork also reflects the state of its characters (largely played by young actors and a host of nonprofessionals): all jacked up with hardly anywhere to turn. City of God is a marvelous achievement that refuses to avert its gaze from the poetry and the insane savagery of the hopeless, that uses its vision and skill to give voice to the voiceless, and that opens the doors of possibility to those who have been abandoned by their god and country. 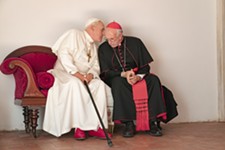