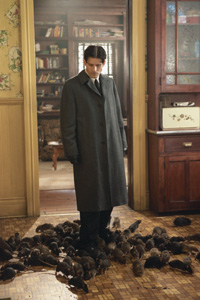 The casting of cult actor Crispin Hellion Glover as Willard Stiles, the gangly misfit who befriends an army of rats and employs them to wreak vengeance on those who have injured him, is by far the best casting choice in a major American film since Spike Jonze and Charlie Kaufman redesigned John Malkovich. Glover’s Willard is crazy, and nobody but nobody does crazy like Glover, an actor whose pale face has more strange, angular planes than wholly necessary. His eyes, beady as they wanna be, are hooded and twinkling; even at the best of times he looks as though he just got done cutting up kittens. Simultaneously, Glover’s lean, Ichabod Crane frame appears preternaturally aged – even standing fully erect, he seems stooped. Willard is based on the 1971 film of the same name, which starred Bruce Davison in the title role (he’s seen here, in photos and flashbacks, as Willard’s late father). The movie is at its dark heart a love story between man and rat. Willard Stiles lives with his decrepit mother (Burroughs, more creased and cackling than Methuselah, but with none of the old man’s zany charm) in an equally decaying and gated manse. He spends his days working in a menial position at the company his father founded, which is now run by R. Lee Ermey’s cruel and callous Frank Martin. Ermey, best known as the sputtering DI in Full Metal Jacket, rumbles through the film with a ghastly military haircut and a permanent clutch of too-white ivories peeking out from between clenched lips. Martin is, in the most basic way, Willard’s nemesis, and when old mother Stiles dies, Martin, who is no longer contractually obligated to keep Willard around, fires him and then tries to yank away his family home. It’s too much for Willard, who by this point has befriended the white rat Socrates and his dark twin Ben (not the mention the whiskery pair’s 448 other relations). Man or mouse or something in between? Willard, who is prone to shouty breakdowns so convincing they make you flinch, is neither the aggrieved outsider nor the long-clawed arm of retribution, but rather a combination of the two: Glover’s subtly nuanced performance is a thing of queer beauty. Director Morgan’s debut is one of those delicious cinematic moments where everything clicks into place – he piles on the atmosphere with a graveyard shovel, bathing the film in dark browns and ambers, and infusing what little sunlight there is in the picture with an autumnal sheen. Sly humor abounds, much of it coming from Glover’s twitchy performance, and while Willard is most obviously a horror film that owes a debt to the E.C. Comics of the 1950s, it’s also a well-scripted and thoroughly engrossing character study. The humor is, indeed, in a jugular vein, as the saying goes. It may be a stretch to think that the Oscars will remember Glover’s performance this time next year, but there’s no question that he’s worthy of the accolade. Cooly feral in dark suit and tie, he’s the man in the gray flannel suit gone way, way over the edge, and it’s one of the most fully realized screen performances in ages, rats and all. 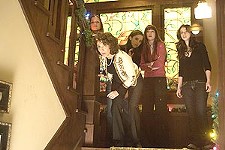 Black Christmas
Although this horror remake isn't as suspenseful or emotionally draining as its influential 1974 predecessor, the film almost makes up for that with its overriding weirdness.