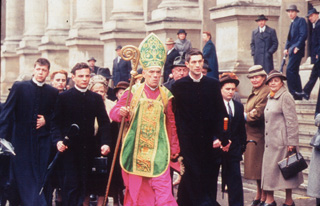 Firebrand filmmaker Costa-Gavras (Missing) turns his lens upon the Holocaust, examining the conditions that allowed the mass exterminations of Jews to continue in virtually full view of the world. This is the story of Lt. Kurt Gerstein (Tukur), a public-hygiene specialist and devout Christian whose innovative treatments for eradicating typhus indirectly inspired the horrors of the Zyklon B chambers. This is also the story of Riccardo Fontana (Kassovitz), an idealistic young Jesuit who helped Gerstein attempt to bring the truth of the death camps to light and inspire action against the Nazis by involving the Catholic Church. In other words, as my notes read, "This is pretty much a big smack on the Vatican." (My notes also read, of Kassovitz, the handsome co-star of Amélie, "I'd love to defrock him.") When he realizes his pest-control methods are being used to commit mass murders, Gerstein pulls a Schindler, slowing the "processing" of "units" by sabotaging the shipments of gas, but his cries to the church go unheeded. Likewise, Fontana petitions the pope himself, begging him to denounce the Nazi atrocities, but receives only platitudes about suffering and prayer in reply. The film's stiff visual language and languid pacing reveal its stage-play origins (it is based on Rolf Hochhuth's Der Stellvertreter). It's a bit like watching a very important prestige miniseries: The blocking is stagy, the locations scenic, and the dialogue self-consciously lofty. ("I shall be the eyes of God in that hell," Gerstein decrees.) As a result, the film never quite springs into full life. Tukur has an down-to-earth Ed Harris quality – a weariness about the eyes that richly suggests the gravity of his circumstances – but his Gerstein is more of a moral exemplar than a flesh-and-blood man by design. Most of the time, this arm's-length approach is a detriment to the film, making it seem too arch and heavy-handed to be truly involving. An exception is the remarkable scene in which Gerstein first witnesses a gas chamber in action. One by one, a group of SS officers take their places at a row of peepholes in the chamber wall. We never see the events inside from their point of view. Rather, these horrors are reflected on the various faces of the men who observe them: smugness, titillation, and, finally, Gerstein's shock and despair. A similar restraint governs Costa-Gavras' repeated use of a visual metaphor: a long freight train chugging rapidly along in long shot, its doors hinting at the human cargo inside but never actually showing it. (Costa-Gavras probably overindulges in this motif, but it doesn't lose its effectiveness.) Just the same, Amen. is too bloodless to satisfy except as a political exercise – albeit an interesting one – right down to the pretentious period at the end of its title.

This 2012 film finds the now 80-year-old Costa-Gavras (Z, Missing) as cinematically accomplished as ever. A taut, fast-moving financial thriller, the film begins with the ...