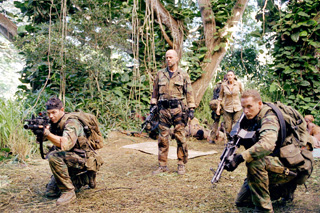 Tears of the Sun

The hawkish Bruce Willis finally out-Keatons Buster Keaton in the Great Stone Face department. As Navy SEAL Lt. A.K. Waters, who’s on a mission to rescue aid worker Monica Bellucci from the jungles of a politically imploding Nigeria, he’s barely a chisel-strike away from finding himself forever emblazoned on Mount Suckmore, so dully vapid and so borderline nonexistent is his comically stoic expression. If the craggy crow’s-feet surrounding his squinting peepers didn’t tell otherwise, you’d swear Willis had his grim mug injected with a half-gallon of Botox, the better to nail that soldierly firmament in place. Willis has recently come out in favor for the impending military action in Iraq (reportedly he asked the U.S. military to let him go kick some Iraqi butt and was, thank goodness for small favors, softly rebuffed). Tears of the Sun feels like some sort of bizarre fantasy camp for Outward Bound gung-ho’s – although to its credit, a lot of the good guys die in the end (now is surely not the time to prettify combat), and the bad guys, well, they go up like phosphorus-laden ants in a microwave. Sent into the Nigerian jungle to rescue Bellucci’s Dr. Lena Kendricks and a trio of missionaries, Willis and his generically written team of SEALs lay down perimeters and bivouac locations like nobody’s business. Arising Rambolike out of the murky waters by a river’s shore, they resemble muscle-bound, avenging behemoths: dark, unsmiling, and nasty, but ready to save the day no matter the cost. In a time of impending war, this sort of groggily triumphal movie militarism is at the very least questionable. However, from all the corpses (American and enemy alike) that litter the film, you can tell that Fuqua has definitely thought about the price of battle. Still, there’s a brassily strident edge of G.I. Joe-ness to the proceedings, headed by Willis’ unflinching portrayal of a Terminator playing a U.S. soldier. With the good doctor and a host of refugees in tow, the SEALs valiantly make their way to the Cameroon border, where, they hope, Tom Skerritt’s gruff Capt. Rhodes (everybody’s either gruff, grizzled, grimy, or all-of-the-above in this film) will have choppers waiting to bring the boys and their charges back home. Their pursuit by a large group of bloodthirsty Nigerian rebel soldiers (the film’s grasp of the horrific intricacies of the various African border conflicts that have flared in the past decade is as shadowy as the jungle Willis is hacking through) means plenty of bloodshed will mark the trail, and while Tears of the Sun bogs down midway through for a brief, if visceral, descent into hell via internecine tribal war, you’d be better off watching CNN to get a handle on just how disastrous the ongoing splintering of these countries really is. This is movie war, and badly done at that, a nameless, expressionless Army of Willis with a squad of noncharacters snipering faceless evildoers in the name of jungle justice. But to what end? By closing credits, I still wasn’t sure why this utterly inconsequential and thoroughly depressing bloodbath was made. To give Willis a chance to strut his cammo-painted stuff? Or to capitalize on the country’s emerging hawkish zeal? Either way it’s as deadly dull as the blunt end of a rifle.