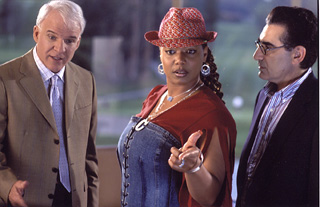 Bringing Down the House

Some fine comedy performances bolster this thinly plotted film (the script is by first-timer Jason Filardi). Queen Latifah, who is also one of the film’s executive producers, continues to strut her talents on the heels of her Oscar-nominated performance in Chicago. Though she does not sing in this film, she does display her proficiency with physical humor while also exuding a confidence that seemingly declares her the queen of all she surveys. To her credit, she succeeds in bringing out the comedic best in Steve Martin: He is funnier in Bringing Down the House than he has been in any movie in a long time. Martin also resorts to more physical humor here, reminding us of the "wild and crazy" guy we once knew before he became an acclaimed novelist, playwright, and New Yorker writer. And Eugene Levy, as has now become commonplace, steals virtually every scene he’s in with his deadpan delivery and tongue firmly planted in cheek. Anyone with a television by now has seen the onslaught of commercials for Bringing Down the House, and is familiar with its premise of the escaped con (Latifah) who latches on to the lawyer she meets in an online chat room (Martin) in order to clear her name of her false imprisonment. There’s nothing about the setup that requires the story to stretch on for as many sequences as it does, and director Shankman (The Wedding Planner) does nothing to brighten the proceedings. It hardly takes the skills of an attorney to figure out who framed her. But that would interfere with the movie’s comic objectives – the collision of black thugworld attitude and white upper-class reserve. Bringing Down the House dances very near the line of racial insult, although it’s tempered by its "equal time" distribution of zingers. The movie features a couple of out-and-out racists – Betty White as a horrified suburban neighbor and Joan Plowright as the dowager legal client who finds it acceptable to break out into old slave spirituals at the dinner table. The movie’s real revelation is young Kimberly J. Brown as Martin’s daughter; she’s a deft teen actor who’s bound to pop up more often in the future. Otherwise, Bringing Down the House is the equivalent of a fast-food meal – everyone seems to love it, it slides down in a hurry, imparts few nutrients, and has us skipping back the next day hungry for more. Rarely do we stop to ask why.