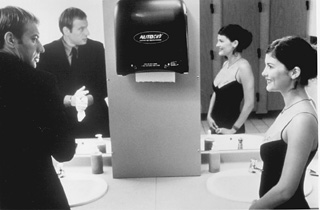 The pathology of Eros gets the star treatment in this French film from the debuting Colombani, and with Tautou (the titular pixie in Amélie) in the lead it borders on Vertigo in terms of sheerly sexy punch. Colombani’s film has far less of Hitchcock’s chilly blond regimentation: This is hyper where Hitch was guarded. However, it still bears the hallmark of a filmmaker and writer (the script was co-written by Colombani with Caroline Thivel) who has presumably had a nasty spill off the love-wagon in the past. That it’s a debut film from a female director is notable, too; if this had been done by, say, Joel Schumacher or another of the Hollywood testosterone brigade, it might well have come under fire for being borderline misogynistic. As it is, though, Colombani pulls a finely nuanced and altogether striking performance from her cast, above all Tautou, whose wide eyes adroitly reflect an inner world that ricochets from hopelessly in love to simply hopeless. He Loves Me, He Loves Me Not poses a problem for reviewers, however. The entire story hinges on a plot device that occurs roughly midway through the film and alters everything that has come before. To give away this massive, unavoidable spoiler would be disastrous and unforgivable, and frankly I enjoy my kneecaps right where they are. So I’ll keep to the first half of the film and let viewers make the discoveries the film has to offer on their own time. Tautou plays Angelique, a Parisian art school student (is there any other kind?) who, as the film opens, is rushing between school, where she has just won a prestigious placing, and her job as a cafe waitress. As in Amélie, she’s all smiles. Not since Audrey Hepburn has an actress borne such a perpetually luminous expression on her face. Tautou’s whole waifish manner belies her boundless energy – she’s like a tiny dervish, all over the place, endless smiles and irresistible twinklings. Angelique is as head-over-heels as she can be about her cardiologist boyfriend Loïc (Le Bihan). He chops hearts at the nearby hospital; she pops in and out of his workday, bringing him cards, painting him elaborately constructed collages, and generally acting like a schoolgirl overdosing on love. The only hitch (no pun intended) is that her dashing young beau is already married. That doesn’t slow Angelique down one bit, though; she continues to meet him and generally make plans for a future that may or may not transpire. Colombani’s film (and Tautou’s portrayal) is swathed in the rich, red hues of Valentine’s Day (by all rights, it should have been released here, as it was in New York and L.A., for that Cupidian wipeout) and awash in symbolic roses, red, white, and (occasionally) dead. That the film’s Austin debut missed V-Day by a month is a minor quibble, though – this delightfully deranged love story should be required viewing for the smitten among us, not to mention the smiters. 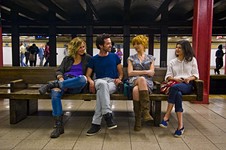