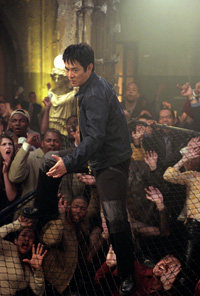 "Who’s got the stones?" is the question frequently asked in this gun fu thriller about a jewel heist gone awry. Forget about plot (the film does, so why shouldn’t we?). The guys with the stones are clearly DMX and Jet Li: DMX, who commandingly enters the movie with his leading elbow, propping it between the doors of closing subway car as if he could bend steel to his will; and Li, the wiry Chinese import who masters most of his brutal fight scenes with one hand, literally, tucked into his pocket. Cradle 2 the Grave is a testosterone-fueled Joel Silver production that moves at a rapid-fire clip that dissuades quibbles with the movie’s severe lack of dramatic coherence and physical logic. The movie’s many narrative convolutions belie its core simple-mindedness. For example, the film’s opening heist sequence – an elaborate construction involving numerous characters, high tech tools, and strategic preparation – depends for its success on the chancy distraction of a security guard by a diversionary flash of cleavage. (It makes little sense in the heist, but at least it thrusts Union into a revealing low-cut costume for half the movie. Who says this movie isn’t thinking ahead?) Cinematographer-turned-director Andrzej Bartkowiak previously helmed Romeo Must Die, which starred Jet Li, and Exit Wounds, which co-starred rapper DMX. All of these films are stylish spectacles with knockout fight sequences (designed by top fight choreographer Corey Yuen). Also, Tom Arnold and Anthony Anderson become an official comedy duo as they deliver an extraneous (and questionably funny) comedy riff, as they did in Exit Wounds, over the film’s closing credits. Cradle 2 the Grave should have a relatively brief life span but it probably will be fondly remembered by those whose lives it touched. 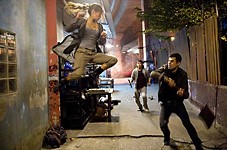 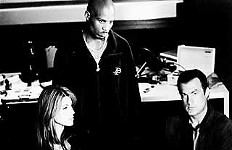