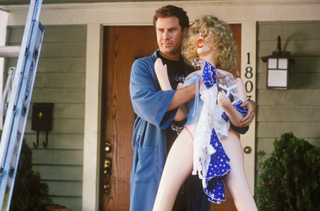 Todd Phillips shot to critical attention with his documentary/exposé Frat House (the title is self-explanatory) and achieved commercial success with his gleefully vulgar narrative feature debut, Road Trip, about four college guys on a … you guessed it. Old School, in the very loosest of senses, marks a maturation of sorts: It’s about a trio of depressed thirtysomethings who decide to start their own fraternity. The age of Phillips’ protagonists has gotten older, though their extracurricular activities certainly don’t reflect that change. At the behest of his best friends Frank (Ferrell), newly and unhappily married, and Beanie (Vaughn), a multimillionaire and family man chafing at the boredom of family life, the brokenhearted Mitch (Wilson) reluctantly agrees to turn his new bachelor pad into a frat house (some rigamarole about zoning laws prompts the switchover to Greek life). The three recruit an oddball assortment of college-aged outcasts and middle-aged has-beens looking to reclaim old glory never gotten (there’s even an eightysomething pledge named Blue). The premise and the cast seem like a sure-fire thing, but Old School too often settles for the obvious ("Hey, fat guys are funny!") than the truly anarchic. The problem somewhat lies in misplaced priorities: Phillips and co-writer Scot Armstrong waste too much time on a silly love-interest subplot for Wilson; that time is much better served by the frat-boy idiocies, like Frank beer-bonging himself into streaking. Wilson, who has collaborated three times with Wes Anderson, has never found another filmmaker who can so fully capitalize on his patented delivery (somewhere between deadpan and dim). Phillips ferrets out glints of Wilson’s inner nastiness here, but they’re mostly drowned out by Mitch’s vanilla-pudding nice-guy routine. In short, he isn’t funny enough, and neither is most of the film … save for Will Ferrell. As the schlubby Frank, the former SNLer gets the best bits – including a misfired tranquilizer dart to the jugular that devolves into a riotous homage to The Graduate – and knows how to make the most of the worst. God bless his little idiot-savant smile and vanity-free bared buttocks. They elevate Old School to a higher plane of asinine.