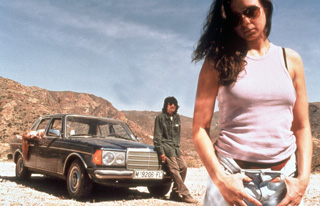 Not enough people know about Samantha Morton, but then why would they? Rolling Stone doesn’t put her on the cover; E!’s Rank has never enumerated her gifts. Morton has made but a handful of films – she was the precog Agatha in Minority Report, the sweet to Sean Penn’s lowdown in Woody Allen’s faux jazzman biopic, a junkie in love in the devastating Jesus’ Son – and Morton walked away with each of those pictures in her pocket. Not many people know who she is, but those who do would pay good money to watch her watch paint dry … which isn’t a bad way of describing Morvern Callar. It sounds like a dig, but it isn’t; it’s simply that Morvern Callar moves so slowly, so faintly, that one might wonder if it was moving at all. But, if I may belabor the point, watching paint dry is a lot more than it’s cracked up to be: The colors change as they settle, dried drips and missed patches produce complexity. So it goes for Morvern Callar, Scottish filmmaker Lynne Ramsay’s follow-up to her brutal debut, Ratcatcher. Her latest begins with a dead body, the still-fresh suicide of Morvern’s live-in boyfriend. Understandably shaken, Morvern (Morton) runs through the gamut of emotions, conveyed – quite boldly – in her motions. (The film is minutes in before a line of dialogue is uttered.) Morvern holds him, falls asleep clinging to him, later steps around him, even filches cash from him so she can get blotto with her best friend Lanna (McDermott) and forget about his rapidly decomposing body for the night. The body stays put for a while, and then it goes away, in a gruesome sort of way that still manages to not elicit the audience’s disgust in our protagonist – a feat made even more remarkable when Morvern steals her boyfriend’s novel and passes it off as her own. Not exactly the classiest manifestation of mourning, but hey, a girl’s got to survive. Morton is powerful lovely here, her usual vulnerability emboldened by the bravado of a survivor; just watch the encounter, between her and a stranger in a Spanish hotel, that begins with teary, mutual grief then mutates into bouncing-on-the-bed rowdiness and finally a violent, defiant affirmation of life, of living bodies. While Morton – so consistently good – is no longer a revelation, per se, first-time actress McDermott is: Her Lanna is a whiny, boozy blast. The faces and bodies of these two women are exquisitely expressive, which is a must because Ramsay’s script is largely wordless, her direction sometimes inscrutable. Dissenters brand her arty and pretentious: occasionally, yes, and I admit a recurring visual motif of wriggling worms gives me the willies … not quite the profound impact I suspect the filmmaker was aiming for. But so what? Ramsay is experimental, unconventional, and forever reaching at the gorgeousness in grief and despair. Her film moves slow as molasses, slow as paint drying – and all the better to see the colors and the complexities. 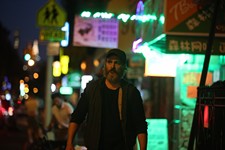 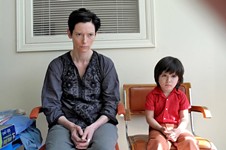