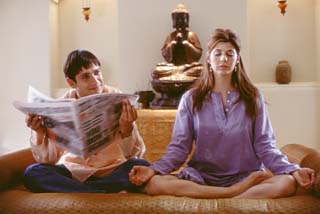 There’s not a whole lot of heft to von Scherler Mayer’s romantic comedy with ethnic Indian entanglements; it’s like overdone naan, too flaky and ephemeral for its own good, but still somehow appetizing. Compared with the other big ethnic romance out there – My Big Fat Greek Wedding – The Guru feels hasty and overburdened with obvious situational comedy. Its "less feeling, more quirky" vibe seems initially to play out nicely as we see stultified young Ramu Gupta sneak out of a Bollywood film musical and creep into the Hindi-subtitled screening of Grease next door. For Ramu, the Indian film industry’s all-singing, all-dancing, all-flying-cars hullaballoo that’s enraptured audiences the world over is no match for the leather-clad charms of the Travolta/Newton-John camp. He’s smitten, and the next thing we see he’s all grown up and heading to New York City, the better to make his own Great White Way (or brown, as the case may be). How are you gonna keep ’em down on the farm after they’ve seen the Pink Ladies? You’re not, of course, and though Ramu (British comic Mistry) moves in with a trio of Indian friends who are making their way along the ever dependable cabbie/waiter route, he soon finds his actorly calling as a faux sex guru when he’s thrust into the role by happenstance and shallow Manhattan debutante Lexi (Tomei), who wants him for his spiritual body and "to save the world." It turns out he has a knack for the aesthete’s life and the cunning naiveté to rip his New Age verbiage straight from the book o’ love by porn star Sharonna (Graham), which, in this cockeyed skewering of the American dream, means new Beamers and boho affairs for all. Can an all-American Indian with Hollywood dreams make it in the big city as a green maharishi and a prolonged clown? Only Rob Halford knows for sure, but suffice to say that The Guru’s third act, which contains among other things a pair of the most annoying cases of deus ex machina since that helicopter dropped through the theatre roof in the closing moments of Lamberto Bava’s Demoni (yet another unique ethnic love story, if you count zombies as an ethnic group), wraps the preceding events in a bow of seriously strange loopings. There’s no denying that The Guru is a sweet little bit of romantic fluffery – it practically has "date movie" scribbled beneath every scene – but where My Big Fat Greek Wedding had a certain amount of subtle chemistry operating at its core, von Scherler Mayer’s film beats you over the head with emotionally soggy paneer every chance it gets. Mistry has a gentleness about him that belies the film’s sometimes cynical tone, while Graham, again cast as a porn star (Boogie Nights), fires off salvos of semi-sexy grins that define the word rictus. She’s cute as a bug, and twice as chitinous. McKean nearly saves the day as a wiseass porn director, though; his weary tone and makeshift opportunism are wrapped around nearly all of The Guru’s functional gags. It’s not enough to keep the film from feeling like an also-ran in the mid-winter romantic comedy sweepstakes, and it’s a hell of a long way from Bollywood. 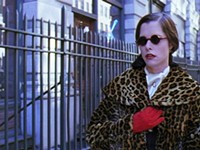 Party Girl
Parker Posey's breakout role came in this NYC coming-of-age indie in which she plays a hipster party animal who tries to settle down as a librarian.