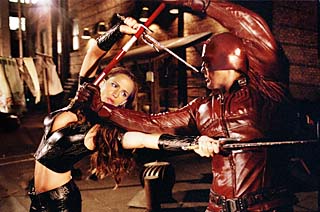 As rendered on film, Bruce Wayne and Vicki Vale left me cold. Peter Parker and Mary Jane played like a squeaky adolescent pop song. But Matt Murdock (Affleck) and Elektra Natchios (Garner)? Hot. And when they strap on the leather for their vigilante other halves, Daredevil and Elektra? Even hotter. But first, a mea culpa: I’ve never read Daredevil, the long-running Marvel comic, or any other comic book for that matter. With all apologies to the fanboys, I can’t confirm that writer/director Mark Steven Johnson’s adaptation is faithful to the source, nor do I particularly care. All I’m looking for is a good yarn, punchy action sequences, and a couple of forbidden kisses – all of which Daredevil delivers mightily. In a lengthy but involving introduction, Murdock’s backstory is laid out: A child of Hell’s Kitchen, he lost his sight in a freak chemical-waste accident and later stood helplessly as his father (Keith) was killed by the henchmen of crime boss Kingpin (Duncan). The adult Murdock practices law – his father’s wish – but also relentlessly hones his remaining four senses, as well as the shreds of what’s left of his sight: a mix of radar and night vision that is sparingly, but evocatively used. Murdock isn’t exactly a superhero – more like a superhuman, meting out his own brand of street justice, especially to those who serve the still-powerful Kingpin. As his kindly priest puts it, Murdock’s a lawyer by day, judge and jury by night. Inner conflict is the bread and butter of comic book heroes, but Daredevil’s torment is especially moving; when, after a violent night of patrolling, Daredevil whispers, "I’m not the bad guy," it sounds more like a question than a proclamation. But then a certain Elektra Natchios walks into his life and suddenly it seems like Murdock might break the monotony of his nightlife (the rogue cop beat, then home to lick his wounds and crunch Percodan like breath mints). Actually, "walks" is too tame to describe Elektra’s entrance; within minutes, she engages Murdock in a playful schoolyard showdown, each martial artist attempting to master the other in a sequence that is not only a fine display of action choreography but also a winsome and bantering first stab at new love. The scene is a proverbial ray of sunshine in a mostly gloom-and-doom movie (in truth, Daredevil could have used more of these moments of levity and lightness, especially with Murdock’s law partner and comic foil, Nelson, played by the nicely goofy Favreau). But vengeance is ugly; it gets uglier still when Elektra suffers her own loss and joins the business of revenge, unaware of her boyfriend’s sizable holdings. By the time gonzo Irish hitman Bullseye (Farrell) shows up to plug ’em both, you can very nearly sniff the tragedy clinging to them all – and when was the last time a comic book movie made you moan with the same heartache as a doleful opera aria? In short, the actors deserve a big round of applause – especially Affleck, for finally wiping the smug look off of his face (OK, 80% smug-free); Garner, for her dead sexy mix of attitude and adrenaline; and the grunting, googly-eyed Farrell, for … well, for being "fookin’" nuts, I guess. But the loudest hurrahs go to Johnson, for whom the project has been a years-long labor of love. His attention to the art and, especially, sound direction is nothing short of stunning (but not the soundtrack: wall-to-wall banal hard rock), and the final blowout between Kingpin and Daredevil is ingeniously scripted and breathtakingly filmed. A previously unproven filmmaker (his directorial debut Simon Birch came and went with little to do), Johnson has just signed his meal ticket with this marriage of big brains, big brawn, and – most happily – big heart. 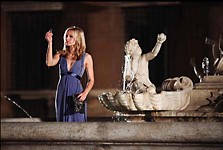 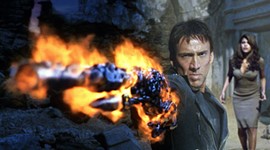