Deliver Us From Eva

The fact that there’s little new in the roundabout urban updating of Shakespeare’s The Taming of the Shrew detracts not a whit from its charms, most of which come from leads LL Cool J and Gabrielle Union, who have the sort of onscreen spark that builds to a roaring firestorm by film’s end. It doesn’t hurt matters that Cool J, as the debonair player Ray, and Union, as the haughty ice he’s hired to seduce, both display remarkable comic flair and are equally easy on the eyes (Union in particular has some great moments that bring to mind Rosalind Russell’s trash-talking reporter in His Girl Friday, only minus, seemingly, the heart), but Deliver Us also benefits from a tightly constructed and knowing script (from James Iver Mattson and B.E. Brauner) and stylish directing from Hardwick (The Brothers). When friends Tim, Darrell, and Michael (Jackson, Edmonds, and Martin), who are married to (or about to be married to) the radiant Dandridge sisters Kareenah, Bethany, and Jacqui (Atkins, Lee, and Good), feel that eldest Dandridge sibling Eva is slowly but surely bringing woe to their lives with her incessant and uninvited domestic advice, they pool their funds and hire Cool J’s smooth-as-butter Lothario to woo her out of their lives once and for all. As befits a romantic comedy, Ray’s sterling good looks and reserved demeanor quietly wear down Eva’s workaholic rough edges and love begins to blossom on both sides of the equation. Unfortunately, the new Eva – who trades her no-BS attitude and conservative wardrobe for a more freewheeling approach to life and fashion – proves to be even more of a thorn in the men’s collective side, as suddenly their wives and wives-to-be begin comparing the tiny flaws in their own relationships to the sparkling example set by Eva and Ray. Again, there’s precious little new in Hardwick’s story, but the cast is largely excellent, emboldened by the steam rising off the leads. Mattson and Brauner’s script sports a number of laugh-out-loud gags interspersed with the sort of dewy-eyed romantic moments that only seem to happen in the movies – seeing LL Cool J stride a shining white stallion really ought not work, but here it does – and their grasp of the subtleties of married men’s territoriality around in-laws and their teeter-totter self-worth is spot-on. The film’s major drawback is the broad strokes with which the henpecked trio of males is presented – they’re not quite caricatures, but their individual quirks feel as though they were cribbed from other, better films. That’s hardly a debilitating drawback in a romantic comedy that aspires to be pure, googly-eyed fluff, but at times Deliver Us From Eva aims higher (notably in its sideline examination of the internal politics of relationships) and then falls short of the mark when the more obvious clichés arise. Still, where else can you see "Ladies Love Cool James" cruising around town in a meat wagon while picking up women left and right? 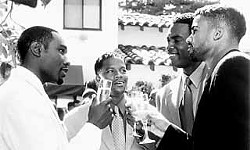 The Brothers
Hardwick's debut feature goes to pains to distance itself from the black male ensemble comedy genre that has blossomed in the past few years (F. ...