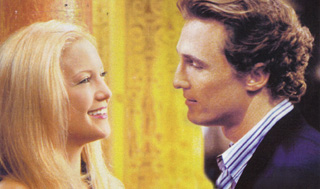 Hudson’s Andie Anderson, an NYC writer with "serious" aspirations working at a fluffy women’s magazine called Composure, is known as the "How to" girl, due to her regular column divulging such things as how to snag a man, how to slough off winter weight, etc. Hudson the actress, however, might better be described as a "Can Do" kind of gal – perky, more than a little precious, and willing to do whatever it takes to get the laugh. I admire her spunk: With the mostly unfunny material she’s working with, Hudson’s beating a dead horse – and hard – but she does it with a smile, dammit! The dreadfully contrived setup has her crack journo digging for research for her next column, titled "How to Lose a Guy in 10 Days." The plan is to pick up a guy in a bar, make him swoon, then systematically drive him away in a week and half, employing the entire arsenal of bad-girlfriend tricks – crying jags, baby talk, rants about being too fat, disregard for boyfriend’s poker night, the like. But there’s a snag. Andie sets her sights on playboy ad exec Benjamin Barry (McConaughey), who has his own game cooking. Due to an equally contrived setup, Ben bets his workmates that he can date a woman for 10 days (that’s nine days longer than any of his previous relationships). That means Ben’s willing to wade through hell and high water to hold onto the increasingly schizo Andie. It’s meant to be a hoot and a holler – the extremes to which Andie goes to repel Ben, the extremes to which Ben goes to ignore Andie’s apparent psychosis – and occasionally some fine moments are extracted from the gross theatrics of the two. But if you caught How to’s trailer in the promotional push of the last few weeks, then you’ve already seen each and every one of those fine moments. What didn’t make the trailer is a leaden lineup of set-pieces, none funny enough, nor nasty enough to make the film’s frankly brutal premise sing. There could have been some snarky fun to be had in lining up relationship foibles and shooting ’em down; replace "snarky fun" with "standard Hollywood fluff" and you’ll be closer to How to’s sensibilities. In the end, we know Andie and Ben will kiss and make up – how could too alliteratively aligned pretty people not? – but first we must wade through the protracted and wholly unwarranted period in which both huffs about the other’s deceptions. Finally, girl loses boy not, but why should we care? They were too busy snookering each other to ever achieve a legitimate connection, and I was too busy wondering if Hudson’s close-ups were all shot in San Francisco (how else did she achieve that everpresent soft-focus mist?) to give a rat’s ass either way.