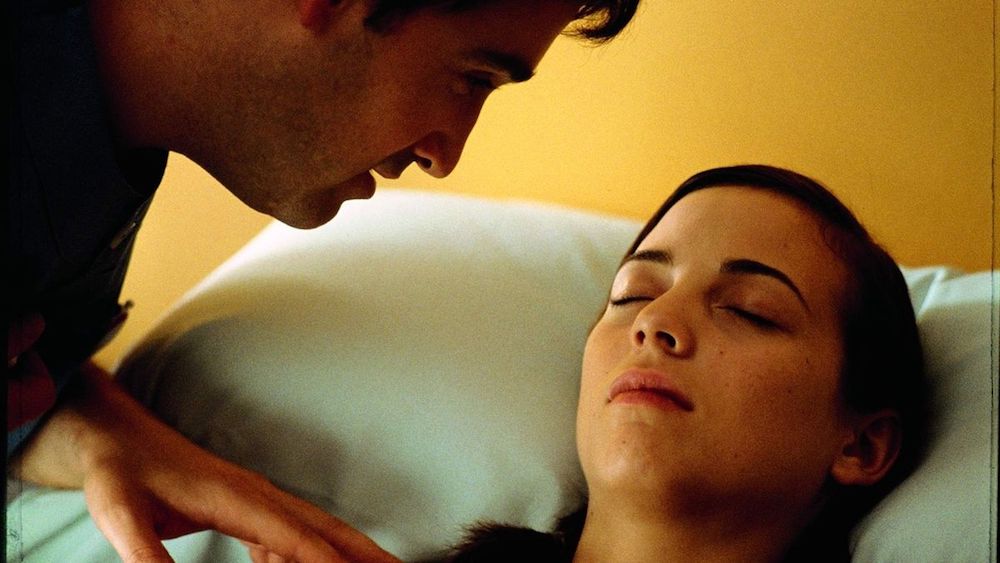 Marco (Grandinetti), a fortysomething Argentine travel writer, cries easily: at the ballet, at a party where Brazilian singer-songwriter Caetano Veloso performs. Marco isn’t prone to melodrama; it’s simply that he is overwhelmed with the beauty of these moments and can’t help but cry in the face of them. It’s not hard to relate. Despite having seen Spanish writer/director Pedro Almodóvar’s last film, the Oscar-winning All About My Mother, a half dozen times, I still get weepy every time the camera swoops over one particular night scene of Barcelona. Talk to Her, Almodóvar’s 14th feature, has similar moments of almost unbearable beauty, although this is a decidedly more downbeat film, full of yearning and loss and frustrated attempts at communication. The two men here – Marco and a male nurse named Benigno (Cámara) – are in love with two comatose women. Despite the urging of the film’s title, dialogue isn’t exactly an option, so instead, the two men turn to each other to forge an empathetic friendship. Marco’s lover, Lydia (Flores), was a bullfighter spectacularly gored several months prior (in a startling and lyrical set-piece made all the more so by Alberto Iglesias’ score). Benigno is besotted with a dancer under his care, Alicia (Watling), who was hit by a car four years earlier. Prior to the accident, they had what Alicia might have called a passing acquaintance; those in the know would more rightfully label it the first seedlings of Benigno’s enduring obsession. To the credit of both Almodóvar and Cámara, neither parcels out judgments regarding the slippery slope of Benigno’s ardor. When Benigno’s story takes a dive into the sensational, Cámara grounds it with gravity and, above all, the tender conviction of a man who believes he has love on his side. Grandinetti’s role is less bells and whistles; while Marco isn’t exactly the film’s conscience (Almodóvar is neither as simplistic nor moralistic), he does provide the easiest entryway into the film, and it’s impossible for the audience not to take a cue from his overarching compassion. In short, both men are exquisite, and their subtle, modulated portraits of melancholy and longing are equaled by Almodóvar’s script and direction. Gone are the delicious hysterics of his earlier works; with the exception of a seven minutes long surreal, silent, black-and-white film inserted in the middle of the narrative (which continues Almodóvar’s curiously frank depiction of the female body, rendered in the form – stay with me here – of a gigantic model vagina, pubic hair and all, through which a thumb-sized man enters and pleasures his girlfriend), Talk to Her is a mostly restrained, though by no means unemotional, work. Ultimately, it does not connect quite as profoundly as All About My Mother (a film which forevermore will play in heavy rotation on my desert island list), but it does cement Almodóvar’s reputation as an immensely talented visual artist. In color, composition, and motion, Almodóvar’s film is a lush, elegant thing, and unlike most contemporary filmmakers, with their fingers always on the splicer, Almodóvar is unafraid to sit back and luxuriate in a moment, finding something gorgeous in an act as mundane as the placing of a bedgown on a comatose patient and improving upon the already breathtaking modern dance numbers (choreographed by the renowned Pina Bausch). Talk to Her begins and ends with Marco attending dance performances. In the concluding number, a corps of dancers file onto stage to the sound of a Cabo Verde mazurka: In couples two by two and barefoot, the women in flimsy slips, the men in khakis, their hips knock back and forth in a seductive, metronomic sway. The camera sits back and luxuriates. Marco cries. There might be a lump in my throat, too.