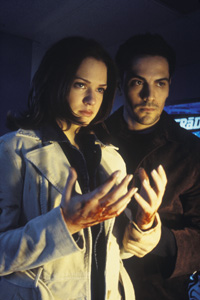 It’s difficult to say with any certainty whether or not Rube Goldberg would have enjoyed this gross-out teen horror film, but I suspect the great inventor, Pulitzer Prize-winning cartoonist, and engineer would have dropped at least a chuckle or two over the myriad convoluted and clever ways in which the filmmakers dispatch their hapless characters (it’s almost certain Charles Addams and Edward Gorey would have done so). Goldberg, who died in 1970, is best remembered today for his "Inventions" cartoons, which routinely featured ludicrously complex machines performing the simplest tasks for the laziest people. Remember the opening scene of Pee-wee’s Big Adventure, in which Paul Reubens’ breakfast was created by an assemblage of eggs rolling down shoots, marbles hitting toaster levers, and so forth? That was pure Goldberg, and so are the many fanciful ways screenwriters J. Mackye Gruber and Eric Bress have concocted to kill off the various teenage cast members of Final Destination 2. The story here is similar to the first film: Minutes into a trip to Daytona Beach with a trio of friends, Kimberly Corman (Cook) receives a horrifying premonition of impending doom. In it, a massive pileup and automotive conflagration on the highway kills not only her friends and herself, but a half-dozen others. When she pulls over to the side of the highway post-reverie, she witnesses the identical smashup, although her own life and the lives of the travelers immediately behind her SUV are saved by kindly highway patrolman Thomas Burke (Landes). As in the first film, Final Destination 2’s main conceit is "You can cheat Death, but not for long, because Death is keeping score and hates loose ends." One by one, the apparently lucky passengers who survived the on-ramp disaster begin to perish in gruesome and ingeniously plotted ways. Don’t put on that new Rolex you bought with your lottery winnings and then stick your hand down the garbage disposal, the film cautions, when there’s a frying pan fire and an exploding microwave nearby. Good to know, and Alex? I’ll take inexplicable twists of fate and death by irony for $200. While Final Destination 2 is nobody’s idea of a classic, it is surprisingly good fun for the current crop of horror films, reasonably well-plotted and full of jaw-dropping, white-knuckle scares. That said, it’s most definitely not for the squeamish nor the easily offended – the death scenes in Final Destination 2, of which there are many, are immensely bloody and imaginative affairs, full of exploding limbs, squashed bodies, and graphic, gory ultra-violence. It’s a wonder this passed the MPAA with an "R" rating, frankly, but perhaps Jack Valenti was out that day. As a meditation on fate, chance, luck, or what-have-you, viewed through a splatterpunk lens, it has the philosophical underpinnings of Sam Raimi on crack, but you can tell – oh, boy, can you tell – that the writers had a ball sketching out the various chains-of-doom that get everyone in the end. Call it guilty pleasure, call it submoronic, call it whatever you wish – Rube Goldberg couldn’t care less, because Death’s already got him.