Intriguing and stylish, the Spanish film Intacto posits a world where luck is a commodity to be found, nurtured, and occasionally revoked. That luck -- the intangible, seemingly random ability to Pick 3, or Black 21, or whatever the game -- could be something to be mined and then jealously guarded from others as though it were a fortuitous bank note, is a cunningly simple kernel for a film, and director Fresnadillo does wonders with it. That said, Intacto, with its multilayered plot and peculiarly European sense of high style (everything and everyone here looks as though ripped from the pages of the July 2008 issue of French Vogue), as well as its anything-but-random, puzzle-box emotional schematics, may be a hard sell stateside. The ideas revolving at its core -- that luck is no lady but neither is it as vague and unapproachable as we'd like to think; surviving tragedies scars people more than the tragedies themselves; everyone looks smashing in a crème-colored suit -- are densely packed and take a while to chew through. They're that much more rewarding, though. Intacto somewhat recalls Alejandro Amenábar's supercool Abre los Ojos (remade by Cameron Crowe as Vanilla Sky); both films spit up clever ideas like a sick kid on a merry-go-round, but Fresnadillo's film has less goop. Von Sydow plays Samuel Berg, who oversees the luck trade at a remote Spanish casino in what looks to be the middle of absolutely nowhere at all (you can sense Oblivion hanging around just offscreen). When his right-hand man Federico (Poncela) runs afoul of the boss, he's stripped of his luck -- literally -- and cast out of the casino into the real world, where he eventually hooks up with handsome bank robber Tomás (Sbaraglia), the sole (lucky!) survivor of a plane crash and a drifter with more innate luck than anyone Federico has ever encountered. Together they embark on a series of “luck contests” with other gifted individuals, chief among them the lugubrious, scheming ex-bullfighter Alejandro (Dechent), while being pursued by the equally lucky yet hideously scarred cop Sara (López), who's sniffing around Tomás' former career as a thief. Yes, it's a bit bewildering, especially when you take into consideration the many machinations -- emotional and otherwise -- going on at any given moment, but Intacto perseveres with a kind of glittery, sun-drenched charm of its own, regardless of what the characters are doing onscreen. Cinematographer Xavi Giménez ratchets up the visual flair to the heavens -- Intacto looks like a million bucks, even as its characters wallow in grief, despair, and motivations that are downright dicey. The politics of chance come in for a drubbing here, but Fresnadillo's script (written with Andrés M. Koppel) is finally, like Hellraiser's corruptive puzzle box, a thing of dark beauty, chancy but rarely haphazard. 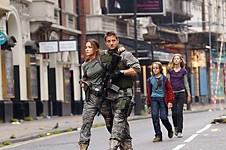 28 Weeks Later
This continuing story of a populace that fears infection from a "rage virus," forges ahead with panic-paced sequences of graphic, random violence.