Into the January dumping grounds of films not quite good enough to merit a holiday release comes this flaccid romantic comedy which poses the burning question: Why bother? As middling comedies go, this is neither as smart as it ought to be nor as dumb as you'd expect, and not unlike the last several films by the male cast members of the television show Friends (who simply can't seem to get a studio gig without signing on to an enervating comedy of some sort), it evaporates from your mind like cotton candy killing time on a summer sidewalk. It's about that filling, too. Kevin Smith regular Lee plays unassuming Paul Morse, a midlevel milquetoast all set to marry fiancée Karen (Blair) when he wakes up in a post-bachelor party hangover haze to find himself in bed with Tiki-dancer Becky (Stiles). Unable to recall anything about the night before but assuming the worst, Paul's presumed infidelity quickly results in one half-truth piled atop another until a seemingly unending series of comical misunderstandings threatens to bring his less-than-artfully constructed house of cards toppling down. The crux of Koch's film (from a script by Greg Glienna, of Meet the Parents) is that this dull schlub is a genuinely sweet guy whose heart is in the right place, if not his trousers. He's truly horrified to discover Becky in bed with him (proof enough that he's just not that smart), and the entire film is one long attempt for him to make a course correction before he inadvertently loses the woman he supposedly loves. Lee is a gifted comic. His work in Smith's Mallrats and especially Chasing Amy is almost subversive in the way he tackles the regular-Joe role and slyly twists it. Here, however, he's given little to do other than play up to the fickle fortunes of fate and occasionally look aghast. Both Stiles and Blair are fine comics in their own right as well, but again, A Guy Thing offers them nothing new to work with. There are subplots galore, not least of which is the fact that Becky is Karen's cousin. There's also the fact that Becky's ex-boyfriend is a dirty cop who suffers from a “testosterone rage thing” (as she labels it), and the zany -- zany I tell you -- conceit that Karen's borderline sleazy father (Brolin) is also Paul's boss. I suspect it will come as a surprise to no one to learn that Paul and Becky, as it turns out, never actually slept together (it's just that obvious, really), and so the entire film is built around an event that, in the real world, would have been discovered and discounted almost instantaneously. There are a couple of fine gags during these otherwise limp proceedings, including one sage bit regarding the title line and a misplaced pair of undergarments, but these just aren't enough to make the picture anything memorable. 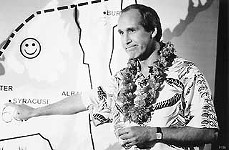