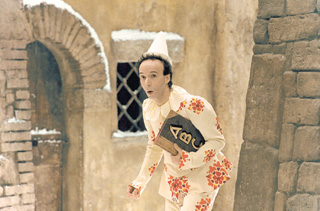 Rarely have I so longed for fondue forks to be plunged with feverish abandon into my eyes and ears, the better to enact stoppage against what must surely be the most irritating adaptation of a childhood classic ever attempted. No lie, stick boy: Pinocchio is a walking, talking nightmare on par with some of the most horrid kid flicks of all time – it's like The Care Bears Movie minus that film's crackling drama and razored pathos. And in terms of its insidious ability to suck your soul dry and reduce moviegoers to braying, praying donkeys, desperate for the emergency exit, this Italian import might just as well be construed as an act of war. Would that the Bush administration had strived to bar Benigni's foul misstep as diligently as they've guarded the citizenry against foreign-exchange students with out-of-date paperwork. No such luck, though, and so we find ourselves stuck with Benigni serving double duty as both director and star of Carlo Collodi's beloved fairytale/parable. That the hyperactive Benigni might envision himself in the role of the little wooden boy is understandable – if anything, his Life Is Beautiful acceptance speech-cum-performance art piece alerted film lovers to the (already well-known in Italy) fact that this is a performer incapable of dialing it down a notch. As Pinocchio, the balding and grossly unchildlike comic plays every scene as though he were overdosing on some disastrous sunshine/puppy dog/rainbow hybrid, stretching his rictal grin right up into the Mr. Sardonicus netherworld, and capering with idiot abandon. Granted, this mystical boy-thing springs from an enchanted log, which may account for his bristling, maniacal performance, but did he have to infect the rest of Collodi's cautionary tale with as much amphetamine chaos as he has? The story, adapted by Benigni and Vincenzo Cerami, follows much the same territory as Disney's animated classic of 1940 – there are bad boys morphing into donkeys, an oceanic behemoth (no Monstro, that), and the dreaded “Cricket” conscience-cum-sidekick – but unlike the Disney film, Benigni's film is a darker and more stylized affair, and badly done at that. On occasion the film unintentionally conveys the phantasmic eerieness of avant-creep icons, the Brothers Quay, with hideously made-up characters furtively struggling to lend a sense of urgency to proceedings that are already far beyond the pale. At best, kids will cower from Benigni's simpering, weasel-in-the-nursery acting chops and adults will snooze, or, more likely wonder who put the acid in their popcorn. Worst of all, Begnini and Miramax have chosen to dub the original Italian dialogue into English using notable stars such as Breckin Meyer (Pinocchio), Glenn Close (the Blue Fairy), and even Regis Philbin as the wily circus ringmaster, which lends the film an even more surreal (and noticeably cheap) aspect. In the interest of fairness, it should be noted that the film does sport some clever production design from the late Fellini/Pasolini stalwart Danilo Donati and a whimsical score by Nicola Piovani, but they're nowhere near enough to stifle the picture's inherent badness. By film's end I was fantasizing that Peter Stormare would drop by with his Fargo wood-chipper in tow, but it was not to be. Appalling. 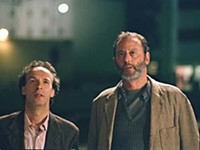