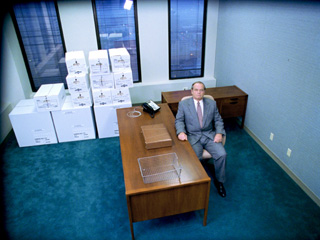 At the age of 66, Warren Schmidt (Nicholson) is a man unprepared to face life's ambiguities. As the movie opens, we see Schmidt alone in his office at Woodmen of the World insurance company in Omaha -- coat in hand, paperwork boxed up, eye on the clock watching the second hand inch toward 5pm on the day of his retirement. All he knows of his future is what he has learned from a career spent working with actuarial tables. But nothing in those tables has readied him for the structure-free life of retirement. The toasts at his retirement dinner ring hollow, his longtime wife suddenly seems to him an unrecognizable old woman, and the young MBA grad who has replaced him at work has no foreseeable use for Warren's accumulation of papers and experience. He is feeling pointless and purposeless, lacking direction, desire, and promise. A lifetime of complacency has finally caught up with him, yet I'm certain that's not the way Warren would explain his disquiet. Then his wife dies suddenly while scrubbing the kitchen floor, a shock that consequently cuts Schmidt loose from the last of his moorings. Unable to fend for himself or his home, Warren takes off in the Winnebago that he and his wife had planned to make use of in his retirement. His goal is to reach Denver and prevent his daughter Jeannie (Davis) from marrying the mullet-headed waterbed salesman Randall (Mulroney), who Warren believes to be unworthy of his daughter. Warren thinks that if he can accomplish this, he will have, at last, accomplished something worthwhile in his life. In another attempt to find purpose, Warren has also sponsored a Tanzanian child named Ndugu. Goaded by the pathos of a TV commercial, Warren decides to send the international care organization the asked-for amount of $22 a month, for which he will receive letters in exchange from Ndugu. Schmidt writes long letters to young Ndugu in which he pours out emotions that would be unfathomable to this African peasant child -- even if he were able to read. These letters provide the running joke of the film, although in the final sequence these letters prove to be anything but amusing. Nicholson, the actor, is a revelation in About Schmidt, keeping all his usual volatility in tow and underplaying this modern-day Babbit undone. If you thought there couldn't be any thespic attribute of Nicholson yet unseen by the moviegoing public, you were wrong. He invests Schmidt with a rube-like heaviness that is counter to all the jumpy smart alecks he has spent his life portraying. Yet when he gets behind the wheel of that Winnebago, it's impossible not to recall the young Nicholson in Easy Rider 30 years ago, playing the wandering alcholic lawyer searching for something to believe in. Nicholson's co-stars here are no less astonishing. Bates gives one of her very best performances, and Davis strikes just the right tone as Schmidt's exasperated daughter. Alexander Payne (Election, Citizen Ruth) has directed and co-scripted (with writing partner Jim Taylor from the book by Louis Begley) a sad but hopeful portrait of a man who may be more familiar than many of us are willing to recognize. Set in Omaha, like all his films, Payne's About Schmidt shows an exquisite ear for and sense of the American Midwest and its denizens. My primary complaint with the film is the way it is being marketed as a satiric comedy, which is untrue to the film's vision and the way it is realized. The film is funny, although Schmidt's insulated inadequacies are not. There's nothing inherently funny about old age, widowers, Winnebagos, randy mothers-in-law, or so on. (Okay, the mullet cut is funny.) About Schmidt is as sad and poignant and potentially hopeful as it is amusing. The movie is our story as much as it is Schmidt's, no matter if it's viewed as a self-reflection or cautionary tale.