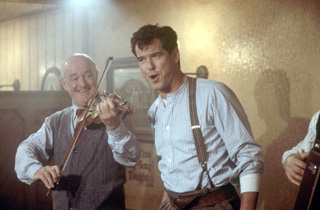 Woe be to Evelyn if James Bond had not come to its rescue. With a nicely modulated performance as the film's Everybloke, Pierce Brosnan rescues this sentimental slice of Irish family history from complete immersion in its hanky-moistening inclinations and narrative predictability. Set in early Fifties Dublin, Evelyn is based on a true story -- a precedent-setting legal case that altered an outdated aspect of family law forever. Brosnan plays Desmond Doyle, a sporadically employed house painter, whose wife deserts him and their three young children at Christmastime. Turned in by his mother-in-law, Doyle has his children taken away from him according to the dictates of the Irish Family Act of 1941, a law that essentially forbade fathers sole custody of their children as long as their mother was still alive -- even if her whereabouts were unknown. Doyle, in turn, challenges the law all the way to the Irish Supreme Court. This father's fight for the custody of his much-adored children is the crux of the story. Why the movie is named Evelyn -- the name of the resolute young Doyle girl -- instead of Desmond is a mystery. This story of a father's fight for his children is a modern-day male “weepie.” Desmond, despite a weakness for ale and his dependence on the public dole, is a loving father and husband. In Evelyn we watch him clean up his act with the help of Bernadette, a loving barmaid by night/chemist by day (Margulies), three committed barristers (Rea, Quinn, and Bates), and his own father (Kelly), who accompanies Desmond on the fiddle as they play for tips in the local taverns. It's lovely to see Brosnan cast in such an average-man role instead of the debonair parts he's generally offered -- especially in his post-Bond days. His performance emphasizes the humanity of the character, unafraid to highlight Desmond's shortcomings while also soft-pedaling the story's soggier moments. This is Brosnan's film to own (but for the welcome screen time of the too-little-seen Alan Bates), and own it he does. Margulies has little to do in an insufficiently developed role as the love interest, and Rea and Quinn go through the motions in the film's extensive courtroom sequences. The movie re-teams Brosnan with Bruce Beresford, who also directed the actor in 1990's Mister Johnson. After having lost his way in recent dramatic fodder such as Double Jeopardy, Paradise Road, and Last Dance, Beresford seems to have rediscovered something of his earlier roots (Tender Mercies, The Getting of Wisdom, Driving Miss Daisy) with the character-oriented drama of Evelyn. The film is at its best when painting the atmosphere and detail of 1953 Dublin. Beresford's guiding hand is not strong enough to completely eliminate the sap but it does manage to keep it at bay.

Mao's Last Dancer
In this film based on a true story, a Chinese ballet dancer defects to the U.S. when he falls in love with a Houston dancer while on tour. 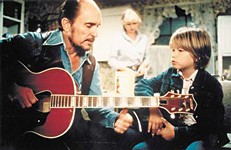