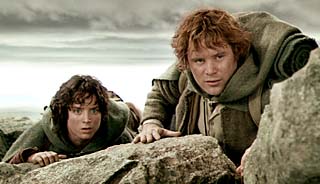 The Lord of the Rings: The Two Towers

If further proof was needed that New Zealand director Peter Jackson is one of the most crushingly talented filmmakers the world has ever seen, then this sequel is surely it, and a pox on those who consider the swords-and-sorcery storyline of the J.R.R. Tolkien mythos to be somehow less than deserving of praise because of a few errant dwarves and dragons. Antonioni it's not, but this sequel to last year's Lord of the Rings: The Fellowship of the Ring is positively astounding in the depth and breadth of its massive, multitiered story arc, its wholly identifiable characters (human and otherwise), and the sheer magnitude of the vision involved in its creation. To put it (very) bluntly, this one kicks some serious butt, at once a fanboy's wet dream of adaptive near-perfection and an engaging, emotionally supercharged epic adventure that will doubtless take pride of place alongside other genre classics and beyond. Effusive praise, I know, but it's hardly hyperbole. Unlike it's Oscar-laden predecessor, The Two Towers is a far more expansive film, with the characters of the first film now far-flung across Middle-earth. Hobbit Frodo (Wood) is on his quest to the cursed land of Mordor to destroy the hellish Ring. He travels with friend Sam (Astin), while the other hobbit pair Merry and Pippin (Dominic Monaghan, Boyd) are captured by Saruman (Lee), and warriors Aragorn (Mortensen), Legolas (Bloom), and dwarf Gimli eventually meet up for the Battle of Helm's Deep, a colossal stone fortress cut into the side of a mountain, while the mighty armies of darkness mass outside. While The Fellowship of the Ring was a much more introspective, thoughtful film punctuated by the occasional skirmish, this one is rife with some of the most impressive battle sequences ever committed to film. The final battle at Helm's Deep is nothing short of awe-inspiring; it's a cinematic achievement on a par with Ben Hur's chariot race, Lawrence of Arabia's equally outsized desert conflicts, and the final raid on Lucas' Death Star. It's that good. Add to this a host of new characters in an already crowded cast, and this second film (in what will ultimately be a trilogy) is more fun than humans ought to be allowed. The hideous Gollum, an entirely CGI creation voiced by Andy Serkis, is a masterful achievement in and of itself, but its integration among the human actors and real-world environments is nearly flawless. A scrawny, whining coveter of the Ring with oversized, pasty eyes and a seriously schizophrenic streak, Gollum is at the dark heart of the trilogy, a seemingly minor character who becomes the dirty pegboard upon which the fate of Middle-earth will dangle. Wood is again fine as reluctant Frodo, a hero in the classical mode, stuck traversing hell itself when he would really much rather be home gnawing thistle. There's barely a weak performance in the bunch, and did I mention the astonishing CGI work? The Ents – huge, living trees that act as shepherds of the forests – are a jaw-dropping creation, as are the colossal armies that evil Sauron has marshaled to his command. The only drawback to this terrific, three-hour film may rest in its gigantic sprawl: At times it's almost too much to take in. God forbid this should ever play on an IMAX screen – the concussive soundtrack and relentless visuals would likely strike viewers deaf and blind (but what a way to go!). Simply breathtaking.