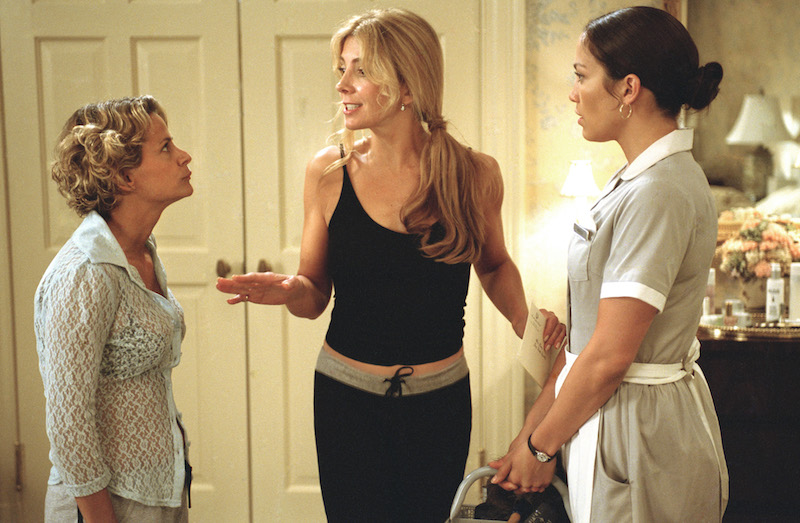 Ever since the out-of-left-field hit of My Big Fat Greek Wedding this year, everyone has been wondering where the next mega-successful romantic comedy was going to come from. The field for “date movie” supremacy this holiday season has only two candidates: this new J.Lo starrer Maid in Manhattan and next weekend's opening of the Sandra Bullock/Hugh Grant vehicle Two Weeks Notice. Whether either will surpass the record box-office numbers of 1990's Pretty Woman -- as MBFGW did recently -- remains to be seen. But we definitely know that it won't be for lack of trying. Maid in Manhattan is a by-the-numbers Cinderella story. It has all the earmarks for success -- a proven director, an outstanding supporting cast, beautiful wardrobes and sets, and, of course, the multimedia “It Girl” of the hour, Jennifer Lopez. What the movie lacks, however, is spark and sizzle. There's no palpable chemistry between Lopez and male lead Ralph Fiennes, plus the script by Working Girl scribe Kevin Wade is workmanlike in the extreme. Nothing stands out as memorable, yet nothing impedes the film's forward progression either. It's as if the film has followed the motto of the service staff at the fictional Park Avenue hotel where Marisa (Lopez) works: “Strive to be invisible.” Lopez is supported by an outstanding ensemble. Partnering her with Fiennes seems a conscious choice to uplift the star's acting credentials as reflected by the company she keeps. Natasha Richardson, Bob Hoskins, and Stanley Tucci all lend beautifully modulated performances to this movie, pop-culture gal-about-town Amy Sedaris adds a touch of sass, and natural-seeming kid star Tyler Garcia Posey is a breath of fresh air. As Pretty Woman was Julia Roberts' ticket to major stardom, Maid in Manhattan may also prove to be Lopez's crossover film. She's already a star, but this film -- especially if it opens strongly -- may earn her the respect she desires as a multi-hyphenate. Also onboard as producers are Elaine Goldsmith-Thomas and Deborah Schindler of Roberts' New York-based company Red Om, a company that must receive a frightening number of Pretty Woman knockoff scripts per annum. Just as Roberts jumps several notches in class when she goes from prostitute to upper-class spouse in Pretty Woman, J.Lo goes from hotel maid to politician's wife in Maid in Manhattan. In both cases, the movies present Cinderella stories about upward class mobility. Neither woman feels as though she'll turn into a charwoman at the stroke of midnight, but when the time comes each eagerly grasps her shot at the brass ring. Marisa's bonds with her fellow maids and her disapproving and old-fashioned Latina mom seem to have more to do with the potential for sequels rather than anything happening in the immediate tense. Wayne Wang, whose career bounces back and forth between studio and independent projects was a good choice to helm Maid in Manhattan. Studio films such as The Joy Luck Club and Anywhere But Here have proven him an exceptional director of “women's” stories, although he has enough edge and insight not to get bogged down in the superficial. Somehow, that touch didn't fully carry over to this film: It's an upscale outing, but this Maid fails to leave a mint on the pillow.