Robert Harmon's 1986 film The Hitcher is a classic of nail-gnawing suspense (with vague supernatural overtones) that the director, unfortunately, never quite topped. He's been directing episodes of Homicide in the protracted interim, as well at the current Sci-Fi Channel miniseries Taken, but for the longest time he's been off my radar. They marks a return, sort of, to the creepy chills that gave The Hitcher its unique frisson, but it's a far cry from Rutger Hauer's chilly, ambiguous evil in that film. Instead, They takes the old bugaboos-under-the-bed trope and spins it into Wes Craven's territory. (The film is tagged with the "Wes Craven Presents" pretitle, but the Scream director's actual involvement in the project appears to have been negligible.) As far as pronoun horrors go, They can't hold a candle to Them or It, but as an anti-tourism ad for Seattle, it's right up there with The Ring in terms of overcast, glistening panache. Psych student Julia (Regan) is unnerved by things that go bump in the night and with good reason: Her kidhood pal Billy (Abrahams) has recently reentered her life clinging to sanity by a thread and babbling about monsters from his past. When he exits via a self-inflicted gunshot to the head, Julia hooks up with old friends Terry (Dominczyk) and Sam (Embry), who also claim to have been experiencing weird revisitations of childhood night terrors. There's much psychological explaining bandied about as one by one people begin to die in dark, closed spaces (the script, by Brendan Hood, incorporates a nifty bit of topical logic in a series of rolling blackouts that periodically plunge everyone into darkness), but to their credit Harmon and Hood never attempt to offer any thorough explanation of what these barely glimpsed nightmare creatures might be (they look a little bit like the spider-rat-bat-thing from Ib Melchior's sci-fi potboiler Angry Red Planet, but just a bit). That's something else the film shares with recent horror moneymaker The Ring and the more traditional, shivers-for-shivers' sake haunting films of earlier decades, not to mention Harmon's Hitcher. Still, there's nothing too terribly shocking about They. Relying on the standard foolish people/foolish choices template of just about every shocker to come out since John Carpenter's Halloween, characters wander into predictably treacherous situations even though they should know better, especially grating in a film trumpeted by Craven, who made fast work of such boneheaded ploys in his gleefully self-referential Scream series. They does have a slam-bang, nightmarish final sequence that puts you in mind of H.P. Lovecraft's mad literary visions, which alone is nearly enough to elevate Harmon's otherwise middling film to greater horrific heights. But of course "nearly" only really counts in horseshoes, hand grenades, and the occasional giant radioactive ant. 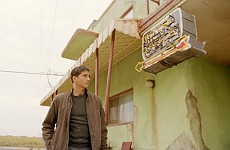 Highwaymen
He may be Mel Gibson's choice to play Jesus, but in this car-chase nightmare Jim Caviezel is on the highway to hell.