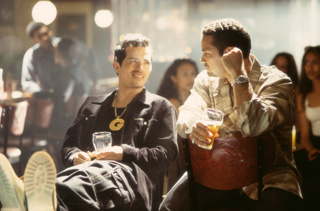 “If only I knew then what I know now,” laments former South Bronx street pharmacist Victor Rosa (Leguizamo) in his bookend voiceover, “I would have done things differently.” Ain't it the truth, baby, and rarely more so than in the gangster genre. It hardly ever happens, though, and despite Victor's best intentions -- to leave the streets behind, go legit, and raise a family -- the past just keeps coming back. Leguizamo might be the most underrated, sub-popular-radar actor working today; he's been tagged as a comic since his work on the old television program House of Buggin', though it's his off-Broadway shows like Sexaholic and Freak that really cook. It was his role as Tybalt in Baz Lurhmann's hyper Romeo + Juliet that announced the arrival of a major dramatic talent, however. Lean and wiry with sideburns that appeared tooled from raw onyx and a killer's improbable, whiplash smile, Leguizamo fairly smoldered his way through Shakespeare and left Leonardo DiCaprio's lovesick Montague in the poison dust. (I won't go into his killer clown role in the regrettable Spawn; suffice to say the actor managed to steal the show from Hell itself in that one.) With Empire, Leguizamo dials it down a notch or 10, though as Puerto Rican drug boss Victor, he's roughly 50% flash and 50% cunning. Sporting a mammoth gold “G” on a chain around his neck -- a tribute to his long-gone brother (“He bought me my first pair of British Walkers,” says Victor, succinctly summing up the Boogie Down South Bronx magic of the early Eighties in a single sentence). With his crew of three he jockeys for turf in the SB heroin trade, forever butting heads with the two other dealers who have divvied up the region in roughly even plots of 'hood. Then two major events happen in one day: His longtime girlfriend Carmen (Cotto) announces she's pregnant (it's a good thing) and Victor meets Wall Street shark Jack (Sarsgaard), who convinces him to step off those mean streets and invest in a seemingly legit series of financial ventures. Dazzled by the sparkling SoHo loft lifestyle of the rich and feral, Victor succumbs to the siren call of money (it's his mantra as much as that of the spiritually bankrupt power brokers he's drawn to), with predictably disastrous results. I kept waiting for Empire to kick in to high gear, but despite simmering performances by Leguizamo and the radiant Cotto -- and cameos by the Dona Flor herself -- Sonia Braga -- and Isabella Rossellini as the Queen of Illicit Pharmaceuticals, the film never quite rises above its gangster cliché origins. Skewing it all from a Hispanic perspective is a grand idea, but there's fewer bodega-candles and chicarrons here than in my apartment; why not examine the details of Victor's world instead of merely glossing over them amid poorly staged shoot outs (rapper Fat Joe mowing down enemies without ever leaving his couch was a nice touch, though) and Never-Leave-the-Hood truisms? Not here, sadly. Empire is a prime example of a filmmaker not trusting instincts on such plot issues. Like its protagonist, the movie tries to rise above convention, flails about a bit, and slides back into self-parody. 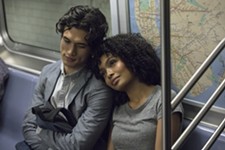