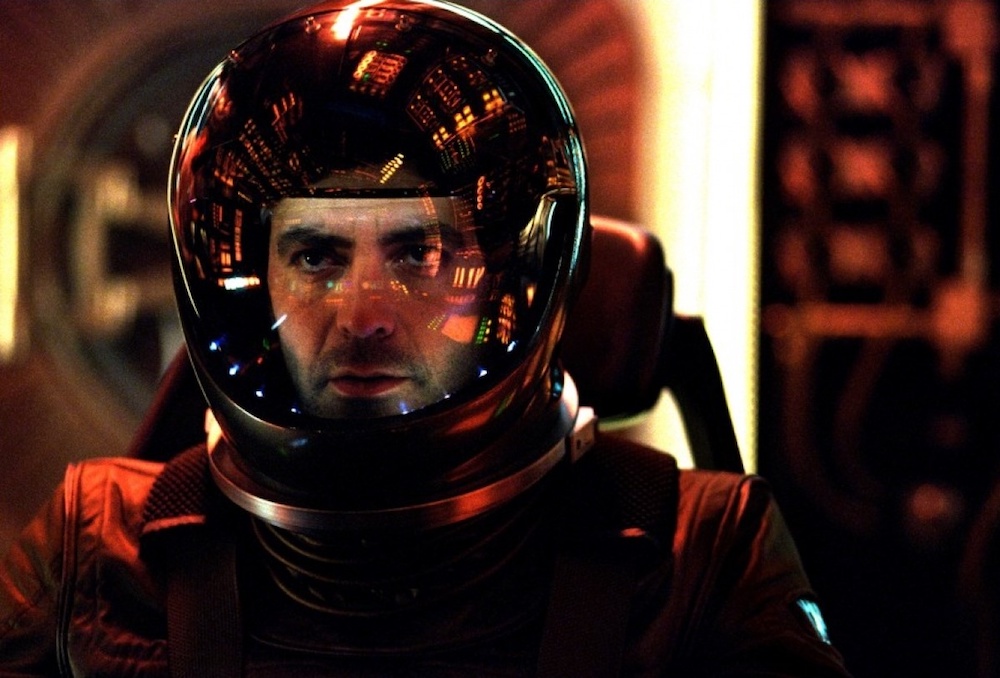 "There are no solutions, only choices," intones the mission commander of the ill-fated space station Prometheus in Steven Soderbergh's new science fiction love story Solaris. That advice, along with the film's oft-quoted line from Dylan Thomas -- "Death shall have no dominion" -- are the only solid guideposts offered by writer-director-and pseudonymous cameraman Soderbergh to help in our unraveling of the narrative, psychological, and physical conundrums in Solaris. The movie is like a haunting Möbius strip, turning in on itself and then turning back around in the process of creating beautiful loops and flourishes. Solaris is a mysterious and powerful movie, much like the strange planet at the far reaches of the universe for which it is named.

Nothing here is predetermined -- not the ending, the progression, or even the mistakes made by the characters. It's nothing like the standard space opera with its lasers and light sabres and intergalactic dogfights between good and evil. In Solaris the enemies and the redeemers lie within each one of the characters. Entering the fray in order to become part of the solution paradoxically makes one an active part of the problem. The questions raised by Solaris are seemingly endless and are not resolved by anything as overt as a narrative conclusion. This is a huge part of the pleasure to be found.

Soderbergh's movie is taken from the novel of the same title by Polish author Stanislaw Lem, and was previously adapted to film in 1972 -- again with the same title -- by Russian arthouse fave Andrei Tarkovsky. At the time of its release Tarkovsky's film was seen as the Russian answer to 2001: A Space Odyssey, trippy and metaphysical in many of the same ways but filled with the existential hallmarks of modern Eastern European thought. Soderbergh's contribution to this loose Solaris trilogy is to downplay the science fiction aspects while heightening the love story angle. Love comes with its own set of horrors: mistakes made, things unsaid, love lost and regained, impermanence, and dissipation. If a morose lover had the opportunity to do things over again, would the same mistakes be made? Would that chance even be desired? Would we make the same choices or lose our way while searching for new solutions? Psychologist Chris Kelvin (Clooney) is caught in these eternal questions and more when he is sent to the remote space station Prometheus to root out the source of the inexplicable behavior of the crew, who have cut all communication with Earth. Strange things are indeed happening when the crew members fall asleep: "Visitors" manifested from the recesses of their minds come to apparent life. Kelvin awakes to find himself in the arms of his dead wife Rheya (McElhone). He tries to shake off the illusion and send away the facsimile, to no avail. She only grows in force and tenacity. She's "not human," barks Dr. Gordon (Davis), in her cautionary attempt to thwart Kelvin's growing attachment to his resurrected wife. (The one voice of scientific reason, Gordon keeps her "visitors" locked in her lab, increasing the mystery about her sequestered companions.) The other scientist onboard Snow (Davies) is a cryptic weirdo, babbling and hinting but never explaining.

It's been a great year for both Davies and Davis: Davies preceded this role with strange and memorable turns in Secretary and CQ, and the dynamic Davis co-stars as the maid in the current release Far From Heaven. Clooney carries the film beautifully, underplaying and refraining from exhibiting his familiar tics and body movements. McElhone weds a mental agility that allows her to deliver lines filled with mystery and confused ontology with a beguiling face< that pleads for understanding with her wide saucer eyes. Solaris is anything but your typical science fiction story or love story: Maybe that's why the distributors have encouraged talk about the exposure of Clooney's butt in this film - to divert attention from all this other cerebral content. As things turn out, Clooney's butt is just one of the many delights to be found on a trip to Solaris.