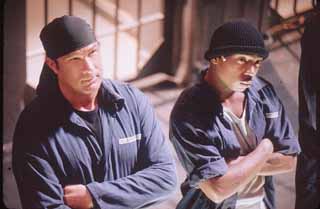 "This is just like a video game," observes rapper-cum-actor Ja Rule, taking aim during one of the myriad firefights that comprise this lunkheaded, vaguely dystopic actioner. Man, is it ever. There's a cartoonish villain (Chestnut), a hottie henchwoman (Peeples), a lantern-jawed hero (Seagal), a handful of innocents, ten thousand bullets, and a premise so wacky there should be a booklet containing the exposition and a list of character moves. After infiltrating a crime syndicate, an undercover operative (Seagal) delivers his gangster friend (Ja Rule) to the FBI and follows him to "New Alcatraz," the high-tech fortress of many a lunkheaded, dystopic actioner. Naturally, the halls are bedecked with flat-screen monitors, boogie fog rises from the floor, inmates glower, and mysterious welding projects send photogenic showers of sparks cascading down upon the inept guards and the charismatic, all-powerful warden (Plana, a Spanglish-speaking slickster). Enter the villain and his black-clad minions, who want something inside the prison walls. Paul, a television actor making his feature filmmaking debut, covers all the bases: Seagal is Russian (though his accent vacillates wildly between urban street patois and his usual mumble) and seeking revenge for his wife's death, à la Martin Riggs. He's also sorta spiritual and gets to keep his power beads in lockdown. Then there are the requisite interracial buddy hijinks (Ja Rule teaches Seagal to say "aaaaight" instead of "all right"), and the wall-to-wall soundtrack is thick with stultifying nü-metal guitar chords and readily marketable gangsta rap. Only Peeples jolts the movie from its somnambulistic shuffle from point A to point B. Her character is an action-babe cliché, with a spiky moptop and flowing Mark Gor trenchcoat, but she's fully invested in the part and her stunts look great. She's lithe and fast, and she really makes Seagal look like a dinosaur (his Wayne Newton bouffant and "slimming" costumes don't help). Unfortunately, Paul's camerawork is strictly small-screen; he shoots entire scenes without a master, switching between extreme closeups, soap-opera style. The action set-pieces are obscured by pimpy super-fast montage editing, and Paul whips out the slow-motion and "bullet time" effects at the most mundane moments. (He's reaching for the toilet paper … and he wipes!) He's assembled a crack team of Hong Kong stuntmen (choreographer Xin Xin Xiong has doubled for Jet Li) and shot and edited their scenes so frantically that it's hard to see what's going on. The movie doesn't even work as a vehicle for Ja Rule, who's perfectly likable but gets lost in the hullabaloo of helicopter crashes, hostage negotiations, and assault weapons. And while we're on the topic of assault, someone should dopeslap the nimrods at the MPAA who gave this McMovie a PG-13 rating. Apparently 90 minutes of gun violence is less dangerous to the public than two shots of George Clooney's butt, seen in Steven Soderbergh's thoughtful Solaris remake, rated R. Go figure. 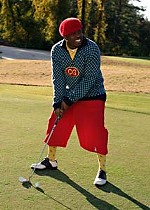 Who's Your Caddy?
Hip-hop culture invades the golf course in this instantly disposable and not terribly funny comedy.